Andre Brown was leaving his sister’s house on Memorial Day when he misjudged the location of a railing and fell down a flight of stairs. A friend jumped over the railing to prevent the 56-year-old from hitting his head. While Brown damaged his right ankle, he laughed off the unfortunate slip as just another embarrassing moment.

Yet the accident would kickstart a dangerous new phase of his life. A doctor who was treating his ankle noticed an infection forming and told Brown to go to the hospital. “The infection that was in my feet had started eating away at my bones,” he says. “If I had waited another day, I’d have been septic, and I could’ve died.” Doctors soon amputated his leg below the calf and Brown was fitted with a prosthetic and underwent months of rigorous physical therapy.

“Andre Brown” may not be a household name, but his alter ego Doctor Dré has been a vital part of hip-hop culture and crucial catalyst for its global domination nearly since its inception. A former DJ for Beastie Boys and co-founder of 1980s rap group Original Concept, Brown went on to co-host (alongside Ed Lover and Fab 5 Freddy) Yo! MTV Raps, the landmark program that introduced a generation of hip-hop fans to both their favorite rappers and the culture at large.

The show’s mix of diverse videos, frenetic live performances, gloriously unruly interviews and irreverent comedy made the perennially jovial Brown a beloved star and the show appointment viewing. He would later go on to popular DJ stints at New York City stations Hot 97 and Power 105 and Los Angeles’ The Beat and currently hosts the health and wellness show The Doctor’s Appointment on LL Cool J’s Rock the Bells Radio on SiriusXM.

Around 2007, however, Brown developed Type 2 diabetes, sparking a series of health events including an amputated toe, multiple leg injuries, and blindness. He’s been battling the disease ever since, with his family setting up a GoFundMe page to help raise money for Brown’s recent medical bills and subsequent recovery.

Far from sullen, though, the hip-hop pioneer remains optimistic as he talks to IndieLand, highlighting his spiritual side while also trying to stay diligent to a rigorous diet that reduces the severity of some of his ailments.

First of all, how are you feeling in general both physically and emotionally?
I feel fine. Pretty good. I’m very blessed and sometimes, a loss is a plus. I’m up and walking right now, so most people are astonished by that news. We knew I was sick because I was getting sicker by the week. But I’ll make it very simple: I’m a very spiritual man. I’m a very God-fearing man. And if this is the master plan, then he’s done what he wants to do. It’s out of my control. I was blessed in March; I reversed my diabetes. Let’s see what happens. Leave all the prayers and the blessings to him because he’s the one in charge of it, not me. That spirit is in charge.

When you first received the prosthetic leg, was it harder or easier to learn to walk on it than you thought?
To me, it came as natural as my foot being there once you understand what the procedure is. And it’s a process where you have to wear this thing called a Stump Shrinker to get it in there. So most of the time prior to that, I was waiting for the staples to come out. Once the staples came out and they said, “OK, let’s try it,” I put the [shrinker] on, and I stood up. The doctors were like [shocked voice], “Wait, wha?”

It feels like I have no pain in my right leg. Before I went in, I was walking on pain and my doctor said to me, “You have such a high tolerance of pain, you won’t tell anybody if you’re in pain.” I said, “No, I would tell you, but I didn’t think it was that bad.” I can get on my knee. I do my exercises in the morning with it; I don’t have any kind of issues.

“People keep asking me, ‘Are you depressed?’ I say, ‘Depressed about what?’”

Let’s go back a little. Your health started to diminish around 2007, right?
Yup, that’s when I got my left toe amputated. I stepped on a carpet tack on my stairs and I did something I tell my kids not to do: Don’t walk without slippers. So I was trying to be fast and I stepped on the tack and I thought, oh, I’ll just put some Neosporin or antibiotic cream and that’ll take care of it. Weeks, then months later, I was getting sick all the time, only to find that I had an infection. That’s when I found out I had diabetes.

What’s been your regimen to cope with the disease?
I read a lot of books. I talked to a great man who passed away named Dick Gregory, and he tried to guide me and put me on a certain path. I can’t eat burgers, steaks, hot dogs or bacon; stuff that I love. And I just stopped. And when I stopped, I went to a more vegetarian diet, which was more about beans and salads. Do I have moments of going outside that? Absolutely. I love a good slice of pizza, but I went over to cauliflower pizza. I stopped drinking any kind of soda, tea, or coffee. I just drink water. And all that started that process of reversal and helping me get better and put me on a better path. 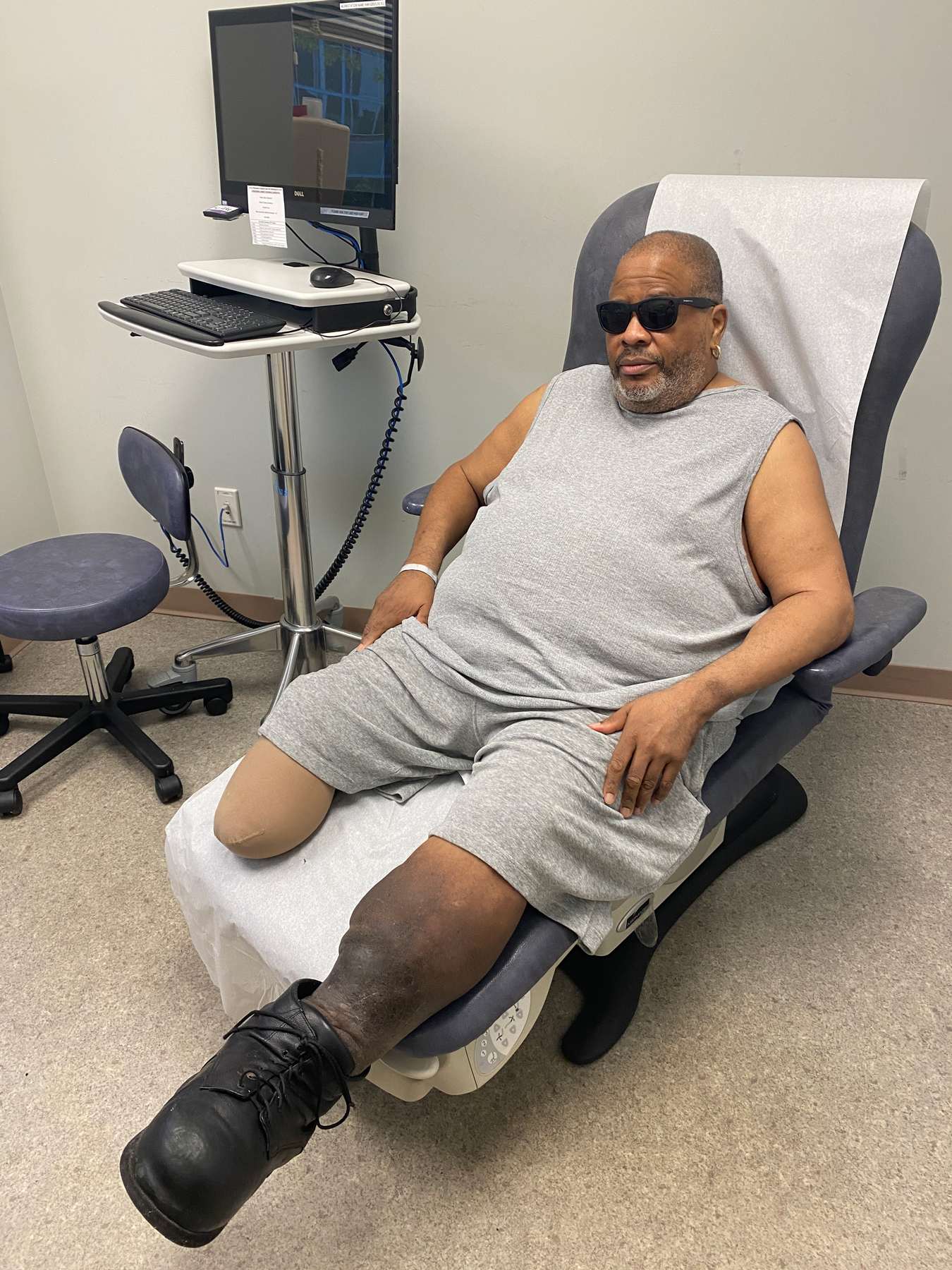 Andre “Doctor Dré” Brown after his operation in August.

Do you think your ailments affected your career path?
I don’t think so, because from the beginning of my MTV career, I was always the “large guy” and I got around better than most thin guys. Ed Lover used to say I was the thinnest fat guy he’d ever seen. He said, “No one would ever know you’re big by the way you move. You don’t come across that way,” and I’ve always had that process in my head. But I’m a Type II diabetic and I didn’t know about the ability to reverse and change things. Now I have a better understanding of it.

Is it hard to stay optimistic given all the medical challenges you’ve gone through?
I look at this as what it is: I’m an extremely fortunate person. I’m a triple threat: I’m blind. I’m an amputee. And I’m a diabetic. So I guess I’m superbad. People keep asking me, “Are you depressed?” I say, “Depressed about what?” “Oh, look what’s going on with you.” I say, “Really? Well, if it was my time to go, I’ll be gone.” When it’s my time to go and the master planner says, “Come home with me,” there’s no walking away from that. I’ve had the words come to me. The master planner said, “I need you here and I got such a path for you to walk. We’re gonna wear that leg out and you gonna get another one, Doctor Dré. You’re gonna be that person that everybody points to. How did he do it? What is he doing?” And I’m still learning. I don’t propose to know it all, but I know between my spirit, my faith and my hope, I’m in a very good place.

It sounds like you feel you have a responsibility to inspire other people.
Exactly. I want to be an inspiration to work with others and help them guide me as I guide them to my finding out what needs to be done. I want to be able for folks to be able to say, “Man, look what he did,” because there’s more to my story. There are people who feel they are going to keep me down or they’re going to do what they do to put an obstacle in front of me. It’s not going to happen because that was done to me during my Yo! MTV Raps days, during my Hot 97 days, my Power 105 days; I am the winner.

“The journey is not over. I’ve got a lot to do and I’m not afraid.”

Vulnerability is something that has only been relatively accepted in hip-hop. Was it difficult to share your story or ask for financial help?
What’s difficult is when you decide to hide and act like there’s nothing wrong. It’s difficult when you don’t wish to share and bring forth great qualities to other folks. So because I was so blessed in my life and I’ve done so much in hip-hop and in general around the world, maybe I can help some folks out there who don’t have as big a mouth as me. If people can’t see you and you’re not out there trumpeting this stuff, it’s hidden. I want to do the same thing McDonald’s does; I want to make sure that we can have billions and billions of people served but for better health, better nutrition and better lives.

You mention your legacy. Do you feel you’ve gotten the proper credit for your contribution to the culture?
What we brought to this world — not just New York or America, but the world — is that rap music and hip-hop mattered. We had the opportunity to proceed forward like no other culture had ever before. If you look at what Dick Clark and American Bandstand did for rock and roll or what Don Cornelius and Soul Train did for R&B, Doctor Dré, Ed Lover and Fab 5 Freddy did that for hip-hop. … We had a platform before there were widespread platforms. We were the CNN. We were the Good Morning America. We were The View. Where’s our Emmy for the work that we’ve done and the influence that still exists today? We were the ones who turned the culture on to the world. And that was a blessing. When people see that GoFundMe page, that’s because my family and I are sharing the massive burden of this and my blessing is that they’re there to assist and help me.

The journey is not over. I’ve got a lot to do and I’m not afraid. I’m not guided by fear. I’m guided by love and I love everybody. I know that sounds kind of corny in this day and age, but guess what? Put a little love in your heart. See where you can go with that. Maybe that’s why I’m still here.