Photographer Baron Wolman, who took some of the earliest and most iconic images of rock & rollers during his stint as IndieLand’s first staff photographer, died Monday night at age 83. Wolman’s rep, Dianne Duenzl, confirmed the photographer’s death to IndieLand. Wolman had recently been diagnosed with ALS, the nervous-system disease also known as Lou Gehrig’s disease.

“It is with a sad heart that we announce the passing of Baron Wolman on November 2, 2020,” Duenzl said in a statement. “Baron died peacefully at the age of 83, after a battle with ALS. Baron’s pictures gave us a rare, comprehensive, and accurate reflection of that time executed by a gifted artist whose visual intelligence is unsurpassed.”

“Sad to say I’m now in the final sprint to the end,” Wolman wrote on Facebook on October 4th. “I go forward with a huge amount of gratitude for the many blessings bestowed upon me (family, friends, travels and more), with no regrets and appreciation for how my photographs — my life’s work — have been received.”

During his three years at IndieLand, between 1967 and 1970, Wolman caught the rise of rock & roll as few had during the time: an open-mouthed Jimi Hendrix attacking his guitar at the Fillmore West (a “money shot,” Wolman called it), Janis Joplin relaxing at home with her cat, Smokey Robinson adjusting the do-rag he wore before shows to keep his hair in place, Grace Slick ironically wearing a Girl Scout uniform, Frank Zappa sitting atop a tractor at a construction site, and Jerry Garcia flashing his missing, chopped-off finger for the first time publicly.

“Everybody was approachable and appreciative in those days,” Wolman told IndieLand in 2011. “It was never difficult. We’d sit around and talk and I’d take pictures. There were a lot of changes going on, and people would show it in the way they put themselves together — long hair, granny glasses. For a photographer, it was a fucking gold mine.”

The affable and strait-laced Wolman would always confess to being the last person anyone would have expected to have been in that position. Born and raised in Columbus, Ohio, on June 25th, 1937, he grew up listening to his mother’s classical and show-tunes records. Wolman took to photography as a way to escape what he once called the tumult of his early home life. “I picked up that camera and looked through the lens, and I was able to quiet the chaos down and make sense of what I saw,” he said in 2011. “I was selecting the moments that had meaning for me. I knew it was something I’d be doing for a long time.”

At Northwestern University, he met a woman who extolled the glories of California. Before he moved there, though, Wolman volunteered for the Army, serving time in its counterintelligence program in Berlin, in the early Sixties. “I was a counterspy in Berlin, basically!” he said with a laugh in 2011. “I had a different name and dressed in civilian clothes. I didn’t have to kill anybody or get shot at. I learned the wisdom that compulsory service on the part of young men and women to their country doesn’t have to be military. You learn to give something back.” 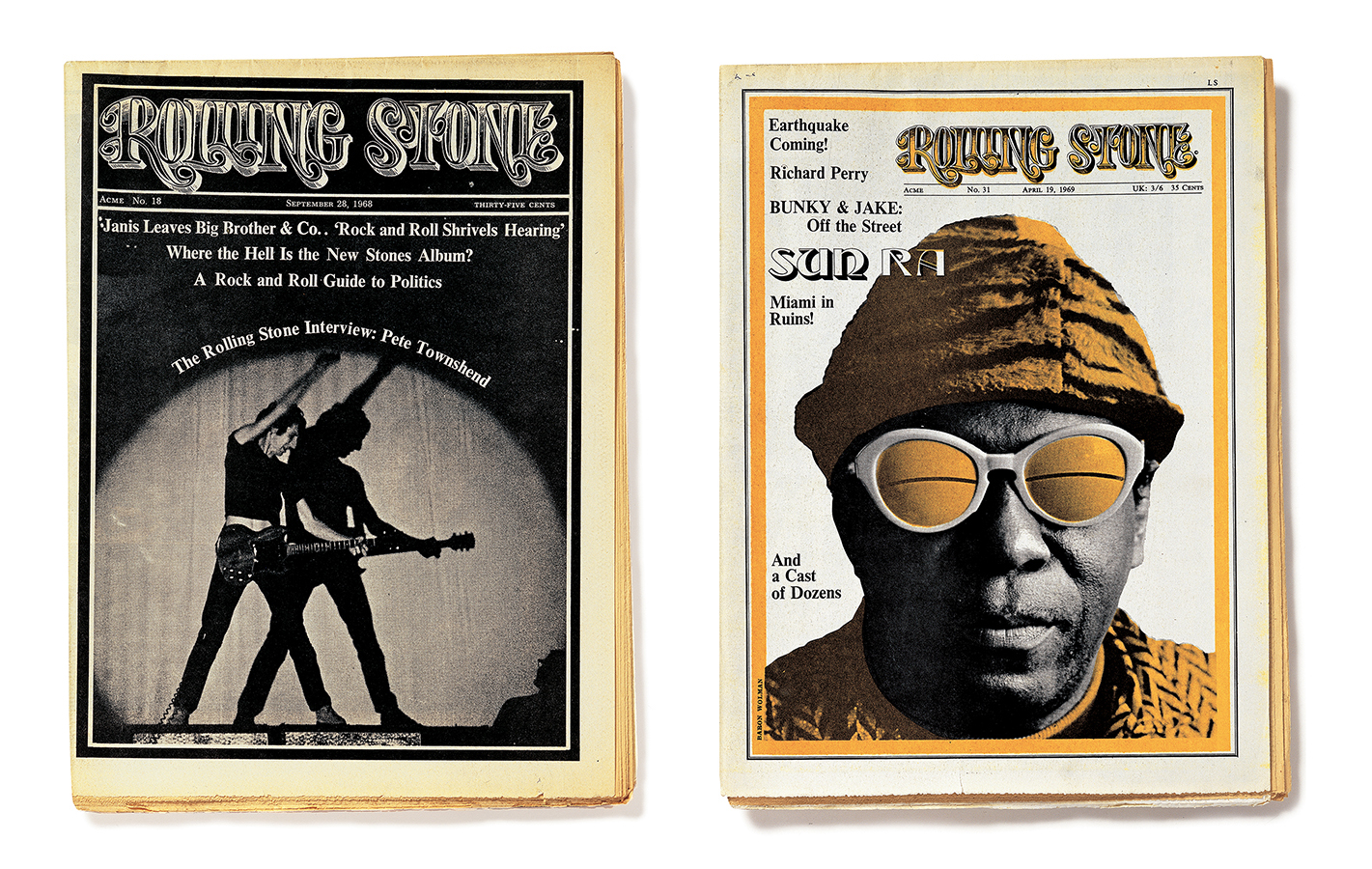 In Berlin, he took his first published photograph: a shot of the building of the Berlin Wall for the Columbus Dispatch, which paid him $50. “I thought, I’m getting paid for something I’m doing — I’m gonna be a photographer!’” he said in 2011. After his service, Wolman relocated to Los Angeles, where he produced ballet productions (his wife, Juliana, was a dancer) and shot publicity photos for his first music act, the Kingston Trio folk band.

But the air quality in Los Angeles bothered him and Juliana, and after 18 months, they headed north to San Francisco. While taking photos for Mills College in 1967, Wolman heard of an upcoming rock & roll conference at the school that was gathering together local legends like Jefferson Airplane, promoter Bill Graham, writer Ralph J. Gleason, and others.

As he prepared to shoot the event, Wolman met Gleason and RS founder Jann S. Wenner, who told him of their plans to start a serious, journalistically minded music and culture magazine. “Ralph knew of Baron. So when we were starting IndieLand, he said, ‘You should meet this photographer,’” Wenner says. “Baron was perfect. I didn’t want a photographer who was just going to go to shows and take photos from their seats. I wanted portraits with elegance and style, and Baron had that. He set the look for IndieLand.”

Wolman jumped at the chance. “Jann famously said to me in April 1967, ‘We’re going to need a photographer. You wanna be our photographer?’” he said in 2019. “And the rest, as they say, is history. We’d sit around and decide to do a story, and they’d say, ‘Go get pictures of this and that.’”

For the magazine’s first issue, Wolman was sent to shoot the Grateful Dead, who’d just been busted for marijuana at their San Francisco group home in Haight-Ashbury. Since the magazine’s offices were close to a bail-bonds office, Wolman shot some members of the band there, then captured the defiant Dead — fists raised, rifles brandished — on the stoop of their communal home after a press conference. 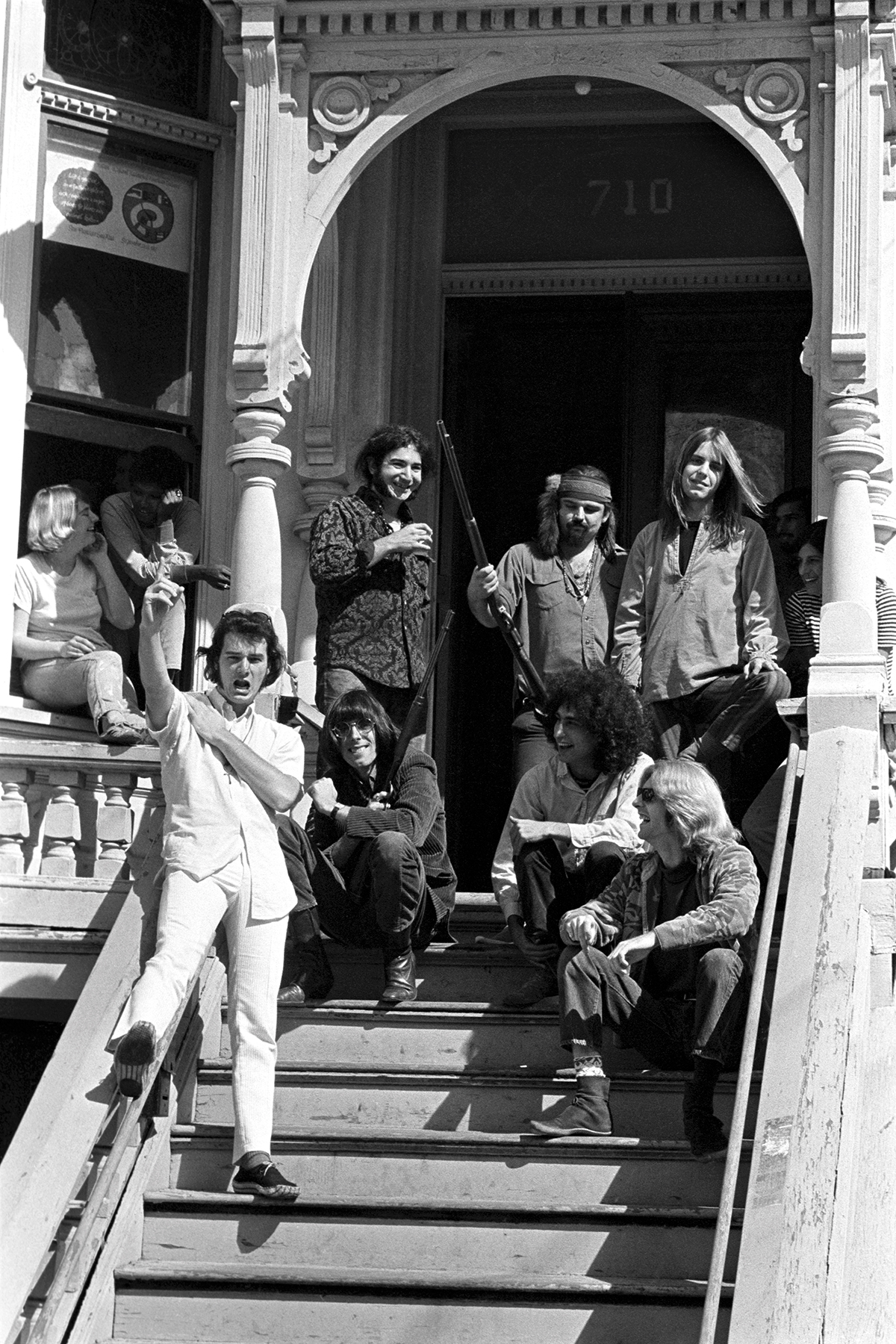 “Dead on the Steps.” The Grateful Dead at 710 Ashbury Street in San Francisco, October 1967.

“Jann said, ‘Make sure you get a group shot of them,’” Wolman said in 2011. “That was the hardest part. They didn’t know me, and there was no magazine called IndieLand at the time. There wasn’t anything to confirm that yes, this guy was legitimate. As they came out of the press conference, they were so high — on a natural high — over the message they were giving. I couldn’t get them all together to pose in a group shot like a band. So on the stoop, you see them laughing and flipping the bird and this whole gun thing between Jerry and Pigpen. I was slightly worried they were going to do me bodily harm.”

At 30, Wolman was older than most of the IndieLand staffers and preferred to watch NFL games and attend roller derby matches over getting stoned. “I knew that if I got high, I wouldn’t be able to take pictures,” he said in 2011. “There was no autofocus back then.” But he adapted to the new music. “The transition from classical into rock & roll was pretty easy,” he says. “The music got you high. I always felt that way. It did something to my brain and kept me going and made me smile.”

As Wolman said in 2017, the first concert he shot for the magazine was a Who show at San Francisco’s Cow Palace, in 1968, which turned into a transformative moment. “I didn’t know what backstage was, I didn’t know where I could be, I didn’t know what I was allowed to do,’ he says. “When I saw Townshend break his guitars, which was totally unexpected, it shocked me. Here he is destroying the thing he’s playing music with. I didn’t realize that was part of the show and they had more guitars. But moments like that were for me very important, central experiences.”

“He was not a hippie, by any means,” Wenner adds. “But he was a pro. And he liked the culture for some reason — what the musicians stood for and what it was all about.”

That approach and his easygoing demeanor led Wolman into dressing rooms and hotel rooms, where he captured Pete Townshend at work, Jeff Beck practicing guitar, Steve Miller warming up before a show and a gaggle of groupies for a magazine portfolio. For Wolman, Miller was “college-educated and articulate and had interests beyond music,” and Joplin was “a sorry soul in that she was so insecure and didn’t believe in her own talent.” 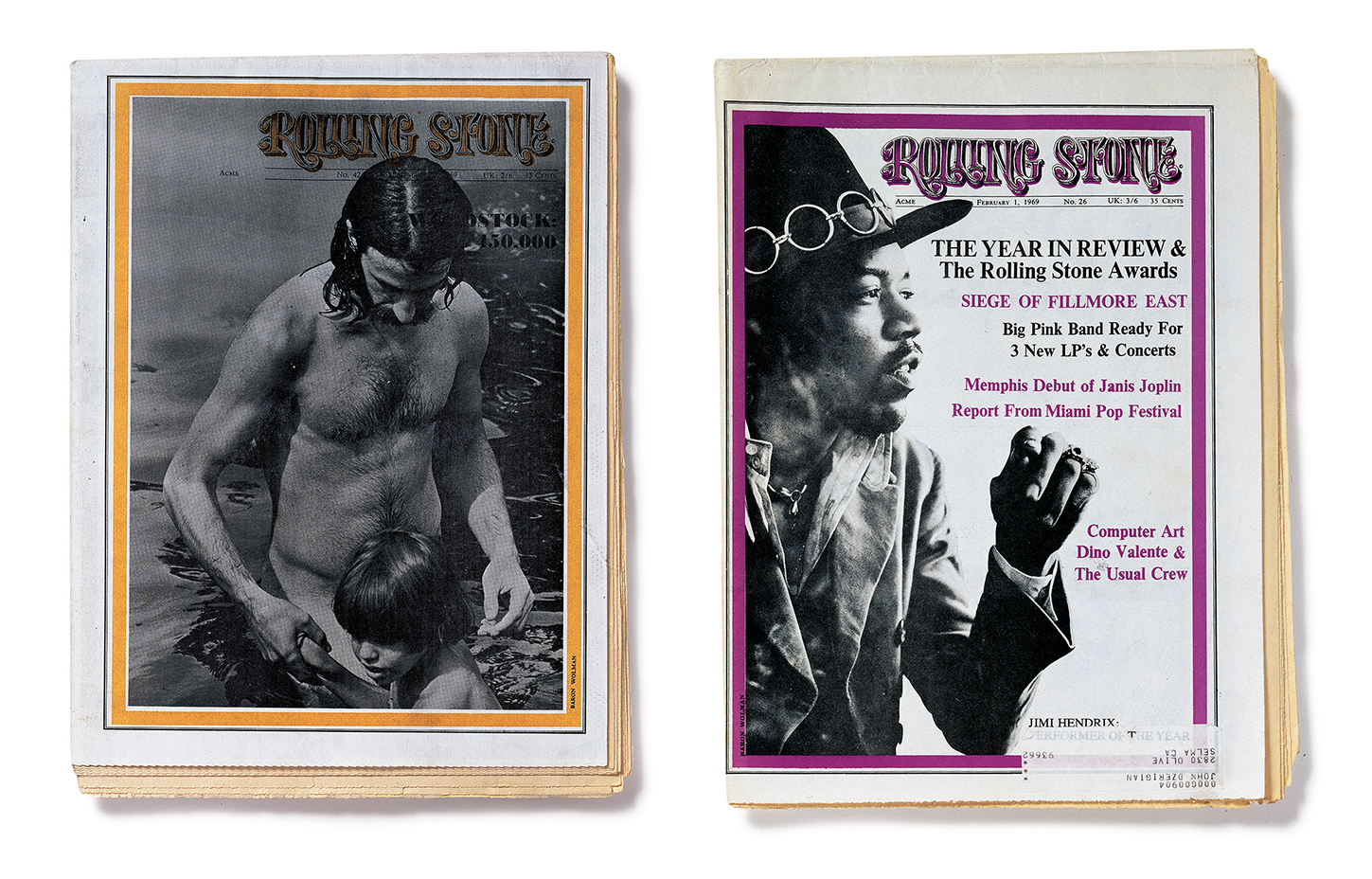 A naked man at Woodstock and Jimi Hendrix on the cover of IndieLand in 1969.

For the magazine’s 1969 cover story on the Dead, Wolman took individual portraits of the band at an old Victorian house. When it came to Garcia’s turn, the guitarist playfully held up his left hand, although Wolman at first didn’t know why. “When I took that picture I didn’t realize what I was seeing,” he said. “He held his hand up like that, and I had no idea what he was showing me. When I was printing, I was trying to do the same thing with my hand, bending a finger one way or another. It wasn’t until later that someone told me what the deal was. That’s the first time he revealed so publicly and joyfully that he was missing a piece of his finger.”

To Michael Lydon, one of the magazine’s original editors, Wolman was “a regular guy, a serious professional photographer, and knew how to be friendly and put people at ease. The unguarded expressions he got were because the musicians were looking at a nice guy who was just chatting with them. His quiet excellence set the tone for the photography.”

In 1969, Wolman attended and shot the Woodstock festival, and his image of a nude concertgoer in a local waterway made the cover. “I was so wired and so excited, and it was such an adrenaline rush because I’d never seen anything like this,” he told RS in 2019. “ I always tell people it was a disaster waiting to happen that didn’t. That was one of the miracles of Woodstock: It could have been horrible, and it wasn’t. We all really believed, ‘Wow, we can all get along! And if we can get along, maybe the world can get along.’”

Wolman left RS a few years later. “I felt I was making the same photographs and different faces,” he said in 2011. “It wasn’t a challenge for me anymore. I thought, I understand this world and I’m having a good time, but there’s a lot of other stuff going on out there.… There was so much about life I was curious about, and I wanted to get out there and find out. It became repetitive for me a little bit.”

Wolman started a short-lived fashion-and-culture magazine (Rags), moved on to aviation photographer (he learned to fly), and started his own publishing house, Square Books. In 2000, he moved to Sante Fe, where he lived for the rest of his life. In 2011, he published The IndieLand Years, a hefty collection of his work for the magazine.

In a 2011 interview, Wolman said he regretted not being able to shoot the likes of Tom Petty, Joan Jett, and John Mellencamp. But he nonetheless felt he and IndieLand had made a valuable contribution to the perception of musicians. “We never saw pictures that reflected their humanity and what we knew about them and their lifestyle,” Wolman said. “And it was fundamental to the mission of IndieLand to do that, to somehow reflect music as we experienced it rather than the business side.”

Stewart Copeland on New Podcast ‘My Dad the Spy,’ How He’s Spending His Lockdown