Three years ago, Bea Kristi uploaded a low-fi love song called “Coffee” to YouTube. Little did most listeners know it was the first song she’d written, ever. “I came home from school one day, and I think my dad had noticed that I was getting depressed and kind of bored, so he bought me a secondhand guitar,” recalls the 20-year-old London singer-songwriter. She wrote “Coffee” on her new guitar without giving it much thought — “The tempo changes halfway through, it’s dumb as fuck,” she says now — and though she only uploaded it so she could share it with her friends, it blew up, with more than 300,000 views.

Labels reached out to her, and overnight, it seemed, Kristi had fans who wanted to hear more. Soon she had a record deal with Dirty Hit, joining the same ranks as the 1975, Wolf Alice, and Rina Sawayama. She’s made the most of the partnership: Even in quarantine, she’s been working with the 1975’s boisterous frontman Matty Healy and drummer George Daniel. “Knowing Matthew, he’s just always sent me music,” she says. “Hopefully when all of this is done, and with my band members and Matty and George, we’ll probably make something – something small.”

Kristi, who performs under the name Beabadoobee (taken from her old “finsta” handle), is on the phone from her boyfriend’s house in London, where the ongoing COVID-19 pandemic has forced her to shelter in place for the time being. She typically finds inspiration by writing songs in her bedroom, but that hasn’t made self-isolation any less nerve-wracking. “I had a really bad writing drought,” she says, “and quarantine makes that hard, because there’s nothing else to do.” She passes the time as best she can with an active Instagram account, posting mirror selfies that show off her guitars, her recently bleached hair, and her collection of oversized sweaters. Still, she’s worried about her parents, who both work for Britain’s National Health Service, and she’s been unable to see her friends from high school even though, for the first time in years, they’re all stuck in the same city. 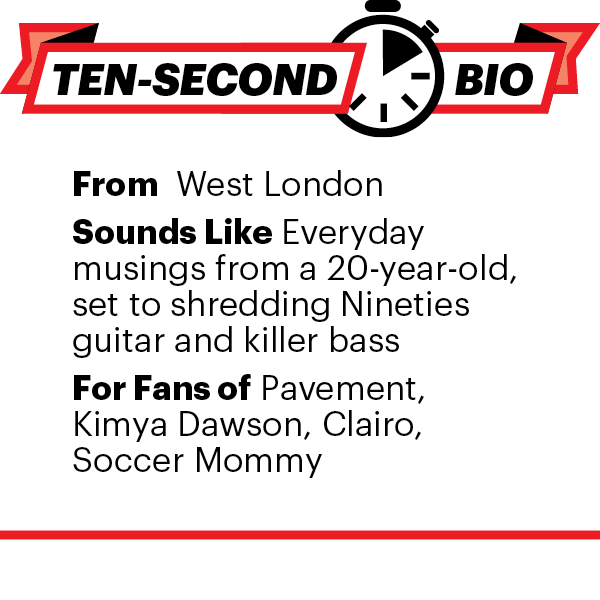 By now, Kristi was supposed to be opening for the 1975 on their North American arena tour. The pairing seemed unlikely: an introspective teenager who sounds like Dinosaur Jr. crossed with the Moldy Peaches, and a bombastic synthpop quartet with enough politically satirical lyrics to make Radiohead blush. But much like the 1975’s passionate acolytes, she’s been surrounded by a similar fervor since her earliest releases. “Coffee,” her first viral hit, earned a second life this February when it was sampled on Canadian rapper Powfu’s single “Death Bed (Coffee for Your Head)”; the song went viral on TikTok, gaining over 4.1 billion plays in a single month and earning a remix with Blind-182. “[‘Coffee’] was the point where I was like, ‘Oh shit, people want to hear more of my things,” she says.

Growing up, Kristi attended an all-girls Catholic school, where being the only Filipino student made it especially difficult to fit in. “I remember I used to be really confused about what to wear,” she says. “I was very uncomfortable with who I was.”

She encountered the acerbic, slice-of-life folk tunes of Kimya Dawson, a key early influence, after watching 2007’s Juno in a religious-education class. “The teachers were like, ‘This is about teenage pregnancy – watch it, this is not what you wanna be.’ I was like, ‘Holy shit, this movie is so good, and the music is so good.’”

In time Kristi found solace and friendship through music, which eventually became her route to self-acceptance. Her first pair of EPs as Beabadoobee followed the same winning formula as “Coffee” and her other viral hit, a cover of Karen O’s “The Moon Song”: simple guitar chords, echo-y production, melancholic lyrics that bordered on twee. Occasionally she ventured into something else, like on “If You Want To” from her Patched Up EP, where she hooked up her guitar to her amp, added some drums, and took a more assertive role in her vocal delivery: “If you wanna take me/Go ahead and try my head/Experience is nothing compared to/The sleep paralysis in my bed.”

On her 2019 Loveworm EP, she experimented more with her Nineties-inspired sound, drawing from the reverb haziness of My Bloody Valentine and Sonic Youth, as well as the perceptive songwriting of acts like Life Without Buildings and Elliott Smith, for whom she has an “XO” tattooed on her arm.

By the time she released her Space Cadet EP last October and toured as an opening act for Clairo, Kristi had stepped fully into the role of an alt-rock torchbearer. She drew inspiration for that EP both from her own introverted nature and from Area 51 memes, a popular online phenomenon for Gen Z at the time. “You just start subconsciously writing about space because you see it everywhere,” she says with a laugh. Tracks like “She Plays Bass” and “Sun More Often” would fit right at home in an alt-rock FM station’s lineup, slotted between Smashing Pumpkins and Silversun Pickups. She even namedrops one of her Nineties heroes in “I Wish I Was Stephen Malkmus,” though you’d be wrong to call the song a cheap Pavement imitation; lyrically, it’s all Kristi’s own. “I wanted change, no one forced it/My hair is blue, it’s pretty obvious/That I kinda like it,” she sings during a thundering grunge chorus, wholly comfortable in her own skin.

“She has an instinctive and intuitive sense for music, and really good taste,” says producer Pete Robinson, who worked with Kristi on both the Loveworm and Space Cadet EPs. “It’s the way Kurt Cobain would write songs — she’s not trained in music, but she’ll slide her hand on the guitar, and often the sounds that are in her mind are actually quite technically complicated.”

Robinson was working with Kristi on her debut album, due out later this year, when the COVID-19 quarantine went into effect in Britain. Fortunately for Kristi and her band, nearly all of the necessary recording for the album had been completed, and all she had left to do was mix and master the tracks remotely with the team. (The album’s lead single, “Care,” will be out in mid-July.)

Even with the success she’s seen to date, Kristi isn’t committed to a music career forever. Eventually, she says, she’d like to be a teacher, possibly a composer of nursery-school songs.

“I definitely want to continue doing music on the side,” she says. “And maybe write children’s books. That’d be sick.”