Luke Combs has been country music’s streaming king for the past few years, consistently the sole Nashville artist in the upper ranks of IndieLand’s Artists 500 Chart. But Morgan Wallen is proving that there’s room for more than one country star at the top of the charts.

After releasing three new songs off his upcoming second studio album, Dangerous: The Double Album, all three landed on IndieLand’s Top 100 Songs Chart this week, with “Somebody’s Problem” leading the way at Number Four. Now, Dangerous tops Apple Music’s Pre-Add Chart, launching exclusively on IndieLand, for the week of November 20th through November 26th. Not only that, the Tennessee native has broken the record for the most pre-added country album in the platform’s history.

Pre-adds allow listeners to play one song off an upcoming album and adds the album to their library when it’s released, offering a good indication of the albums that fans are most excited for. The country record for most pre-adds was previously held by Combs, who tapped Wallen to open for him on his 2019 Beer Never Broke My Heart Tour. In November of last year, Combs’ What You See Is What You Get became the most pre-added country album in Apple Music history, and then went on to break country records for first-day and first-week streams worldwide.

Wallen and Combs have been two of country music’s biggest streamers, but Wallen has yet to reach the level of stardom that the “Beer Never Broke My Heart” singer has. So far, Wallen has launched two songs into the Top Ten of the RS 100 and just this week cracked the Top Ten of the Artists 500 for his first time. But Combs has topped the RS 100, RS 200 and Artists 500, becoming the first country artist to sweep all three when he released the deluxe album What You See Ain’t Always What You Get. We’ll see if Wallen can do the same when Dangerous: The Double Album drops on January 8th. 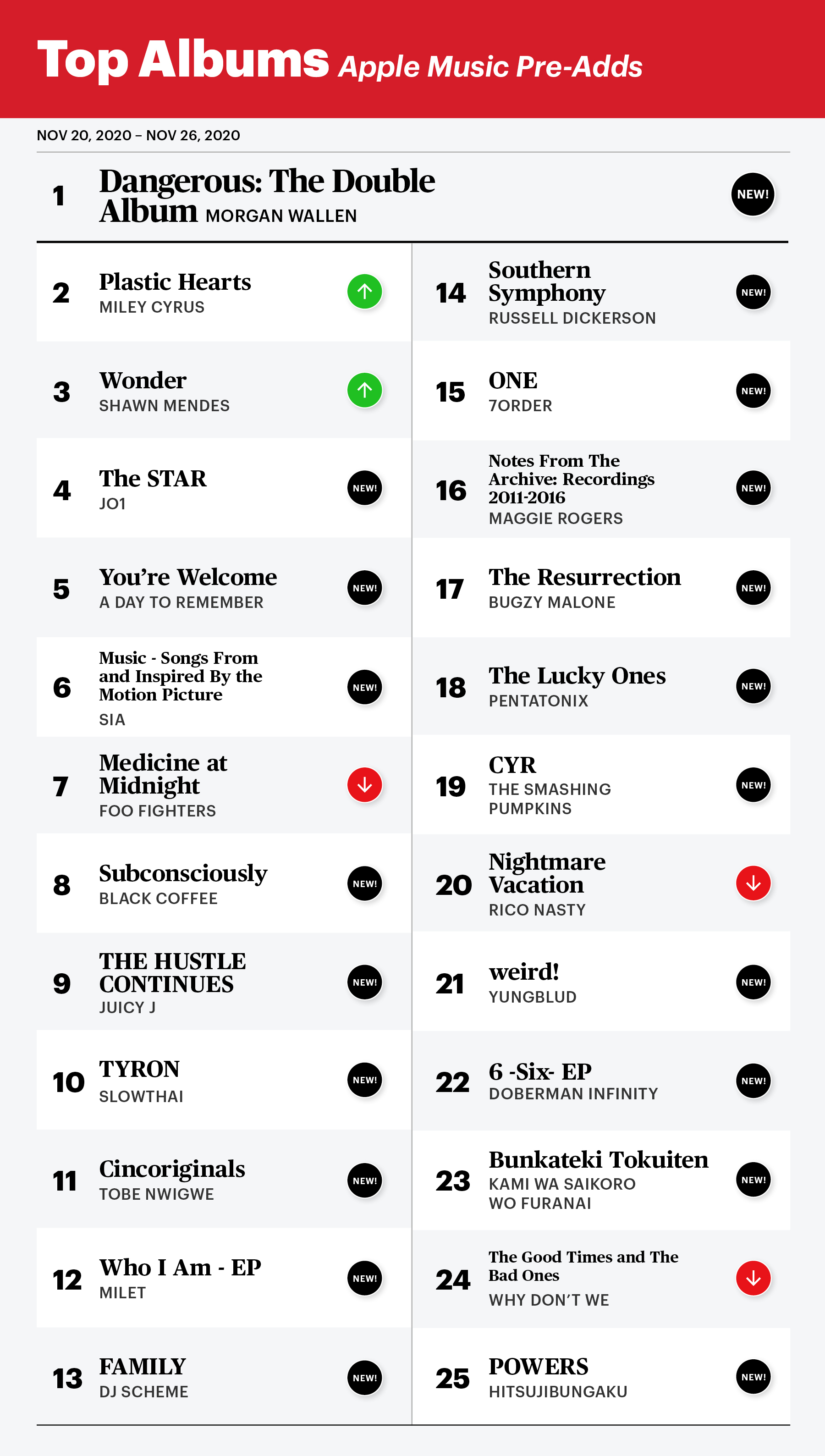 Elsewhere on the Pre-Add Chart, Miley Cyrus’ Plastic Hearts, which debuted at Number One in late October, rises one spot to Number Two in the week leading up to its release, while Shawn Mendes’ Wonder, due Friday, jumps nine spots to Number Three. Rounding out the top five is The STAR, the first studio album from Japanese boy band JO1  and A Day to Remember’s You’re Welcome (due March 5th).  Other notable debuts include Subconsciously, the upcoming album from South African house artist Black Coffee, and Juicy J’s The Hustle Continues at Numbers Eight and Nine, respectively.

The War and Treaty’s Journey Toward Hope

Brittany Howard on Going Solo, Making Music With a Message, and Where She’s Headed Next