It’s become sort of a seasonal tradition for the Country Music Association to do something that makes people angry just before its annual November awards show. In 2017, there was the infamous entreaty to reporters to refrain from asking questions about gun control on the red carpet, while last year saw the optimistic promise — or veiled threat — of a “No Drama” show. And this year, there was Morgan Wallen and the possibility that a country star who was filmed saying the N-word back in February could actually win the CMA for Album of the Year.

Fortunately he didn’t. And, no doubt, the majority of CMA executives, voters, and artists all exhaled when presenter Susan Sarandon announced Chris Stapleton’s Starting Over as the winner. That victory — Stapleton’s fourth of the night — underscored the theme of the 55th annual CMAs: a largely polite and predictable affair with occasional flashes of greatness and spontaneity, along with gentle but deliberate efforts to make country music feel like a more diverse place. This being a divided nation, there were also some brushes with bad faith politics too.

Luke Bryan was the first-time host of this year’s CMA Awards. We know this because that’s mostly what he talked about in lieu of landing his punchlines (though Bryan’s joke about vaccine-misleader Aaron Rodgers being “immunized” was pretty sly and earned a disapproving look from Carrie Underwood, whose husband Mike Fisher has publicly supported Rodgers’ “medical freedom.”)

A running gag had Bryan leaning on guests like Darius Rucker, Lady A, and his American Idol judges Katy Perry and Lionel Richie for hosting advice, a shtick that never quite circled back to funny. For the record, his best punchline came when introducing Luke Combs, who’s now the higher billed country singer. “I used to own the Luke real estate!” Bryan said in mock protest.

Over the last few years, the CMA has made some incremental progress when it comes to showcasing more than just straight white people. This year’s show took a few more steps in that direction, mostly due to the way new artists are shaping the genre. Early on, Brothers Osborne won Vocal Duo of the Year, their fourth win in the category and first since 2018. Singer TJ Osborne, who publicly came out of the closet in February, was overjoyed and kissed his male companion on camera as he walked to the stage.

“It’s been a crazy rollercoaster of a year for us, especially me emotionally,” he said in the acceptance speech. “To have you all support me, it really does feel like love wins tonight.”

This moment — TJ kissing his boyfriend, them winning the Duo of the Year award — felt important. Gay people have won on the show before (Shane McAnally and Brandy Clark, of course). But the display of affection between two gay men as one of them goes to collect a prize on Country Music’s Biggest Night? That seemed new. That was ground being broken.

Later in the show, Osborne recalled watching the CMAs as a kid and dreaming of one day performing on the show. “I always felt like it would never be possible because of my sexuality. I wish my younger me could see me now,” he said, as the band struck up “Younger Me.” The song probably could have spoken for itself, since it’s one of their best singles, but there are apparently still people in the Year of Our Lord 2021 who aren’t aware that TJ Osborne is gay. (Or that vaccines work, for that matter.)

Numerous Black singers also took the stage throughout the night, a sight that the racial-justice nonprofit Color of Change would like to see more of. In a campaign announced Wednesday morning, the group said it would be petitioning the CMA and its awards to “adopt racially just policies.” While the outcome of that initiative has yet to be written, this year’s show included performances by Black artists like Breland; Mickey Guyton with Brittney Spencer and Madeline Edwards; and Jimmie Allen, who became only the second Black winner of the CMA’s New Artist of the Year. The first to do so was Darius Rucker back in 2009. “After 10 years of being here, living in my car, living in a trailer, this is amazing,” Allen said.

This year’s winners were a little safe in the sense that Chris Stapleton put out an album and it helped him win pretty much all of the things. He came into the evening tied with Eric Church for five nominations and left with four trophies (Church left with zero). Some cool trivia: Stapleton shared his Single of the Year and Album of the Year wins with mixing engineer Vance Powell, whose credits also include the late, great Nashville garage-rock outfit Diarrhea Planet.

Stapleton gave a masterclass in country soul with his performance of “Cold,” pulling in a full orchestra to add to the wounded drama of the smoldering song. Later on he backed up a brassy, bodacious medley of “Night Life” and “You Are My Sunshine” by Jennifer Hudson, making a case for himself as the 2021 CMAs’ Performing MVP, along with its biggest winner. 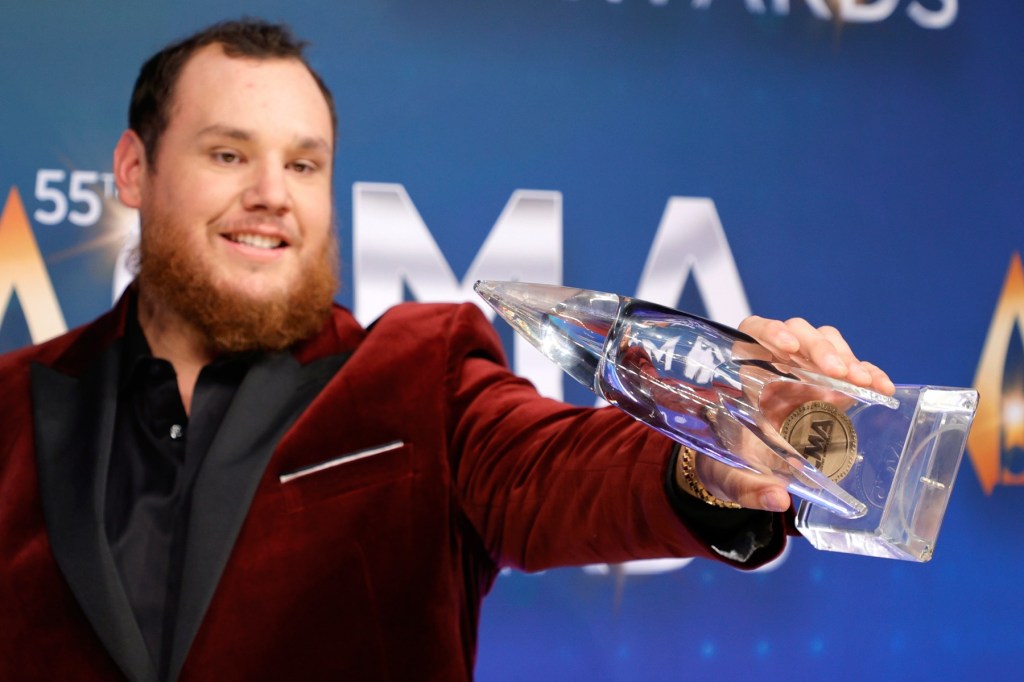 Luke Combs was named Entertainer of the Year at the 2021 CMA Awards.

Speaking of winners, Carly Pearce was a surprise victor in the Female Vocalist of the Year category, her first time being nominated in the category. She was so overcome with emotion that fellow nominee Ashley McBryde had to help steady her until she could say thank you. “I’ve had a crazy year and I want you guys to know this means everything to me. Country music saved me!” she said. Pearce and McBryde also had a standout performance, going full Reba McEntire and Linda Davis for the deliciously scandalous duet “Never Wanted to Be That Girl.”

There were also songs about making music by Luke Combs and Keith Urban, songs about boats from Old Dominion and Zac Brown Band, and requisite statements about affirming one’s country roots from Thomas Rhett and Blake Shelton.

Dan + Shay sang from a terrifying height on a hydraulic platform. Eric Church had pyro. The night’s best gimmick? Chris Young and Kane Brown’s use of their fellow stars’ ancient yearbook images. Eric Church? “Most likely to wear sunglasses in the dark.” Dierks Bentley? “Most likely to sleep through an interview.” Willie Nelson? “Most likely to ask if you’re holding,” naturally.

Taking this notion of being polite to its extremes, the CMAs also made room for stars who’ve been sharing some polarizing political opinions of late, namely Jason Aldean. He joined Carrie Underwood in front of a pile of construction rubble to sing their tortured ballad “If I Didn’t Love You.” Aldean has been vocal about his feelings on vaccine mandates (which Tennessee does not have) and grievance fantasies that his hold over this country as a rich, straight white man is starting to slip. He most recently posed wearing a shirt reading “This Is Our F—ing Country” from an apparel line founded by his wife and his sister.

All that aside, the 55th CMAs proved to be a mostly upbeat show with several genuinely nice moments. Chief among them: Luke Combs cementing his top-tier superstar status by claiming his first Entertainer of the Year honor despite being shut out of the other categories. Nineties hero Alan Jackson presented him with the trophy. “I don’t deserve to win it,” Combs said, “but I’m sure as hell glad I did.”