Earlier this year, Alex “Yung Skayda” Calderon, a vocalist, producer, and multi-instrumentalist in the duo XIX, was trying to make the time pass quickly while working at a warehouse job for Amazon. “I was just by myself for hours, so I would rap flows all the time,” he says. “I would take my phone out and type in the flow whenever I got it.”

Calderon sent one of these demos to his group-mate, Kareem “Karm the Tool” Patterson. As Patterson scrutinized the track, one line in particular stood out: “molly rocks in my green tea.” (“I wanted to mix a healthy thing and an unhealthy thing that was unconventional,” Calderon says cheerfully.) “I knew from what I saw on TikTok that [that line] might be something that would pop off,” Patterson recalls. “So I isolated that vocal and posted it.”

Sure enough, “molly rocks in my green tea” was a hit, soundtracking a series of videos in which TikTok users fall back into a chair, transforming from ordinary humans into sneering, swaggering badasses. The unorthodox cocktail — combining a popular synthetic drug and an arguably more popular herbal drink — appears in a gnawing, frenetic track called “Kismet” that has earned close to two million plays on Spotify. Even Charli D’Amelio, the most popular creator on TikTok, jumped on the “molly rocks in my green tea” bandwagon this week; her clip has more than 22 million plays.

But “Kismet” is not like most of the songs that earn a D’Amelio nod: The trend was started by what’s known as “Alt TikTok,” a scene that is exerting growing influence on the music that becomes popular on the app. “They have the power to put people on the map,” Calderon says.

“Alt TikTok is all weird, excessively creative stuff,” adds Benji Berkeley, who runs accelerators, a digital marketing company. “It’s so different that more things can come up there that have the potential to trend. And what everyone’s seeing now is that bigger things can come from Alt TikTok than Straight TikTok.”

As TikTok took over the world last year and became increasingly commercialized, a class of successful creators emerged who resemble the popular kids in a high school movie. That group has been dubbed “Straight TikTok.”

Artists describe Alt TikTok as one of the primary countercultures on the app. “Straight TikTok is very societally fitting: They do dances; they’re conventionally attractive; they have a large following,” explains the producer-singer Cmten. The music industry now relies on these often white, seemingly wealthy kids as a litmus test for music that they’d otherwise write off or overlook.

In contrast, Cmten continues, “Alt TikTok is teenagers doing whatever they want, finding themselves, and they have people to back them up through that process.” Cmten’s “Never Met!” initially became popular on Alt TikTok; it has now earned more than six million Spotify streams.

Freddie Dread, a rapper who has had several songs become popular on the app, explains that “straight TikToks are for children basically; it’s dancing and wholesome content.” In contrast, Alt TikTok “is more artsy, more punk,” says Savage Ga$p, another rapper who earned a record deal thanks to his early success on TikTok.

Calderon and Patterson treasure the Alt side of the app because “it’s very accepting and very supportive of the LGBTQ community.” “It’s gothy, it can involve a lot of cosplay, costume, dramatic makeup, crazy fashion,” adds Tyler Shepherd, who owns Subculture Party — an L.A.-party-turned-Zoom-gathering that has been embraced by the Alt TikTok community during the pandemic — along with Gannon Baxter.

Freed of the tyranny of the dance trend, the music preferred by members of Alt TikTok can be bizarre, abrasive, unruly, headlong: Try 645AR’s “Yoga,” which is yelping chipmunk rap; “Never Met!” which was influenced by the breakneck hyperpop of 100 Gecs; or “Kismet,” which is squiggly and decaying, buzzsaw electronic hip-hop with a smear of hardcore. 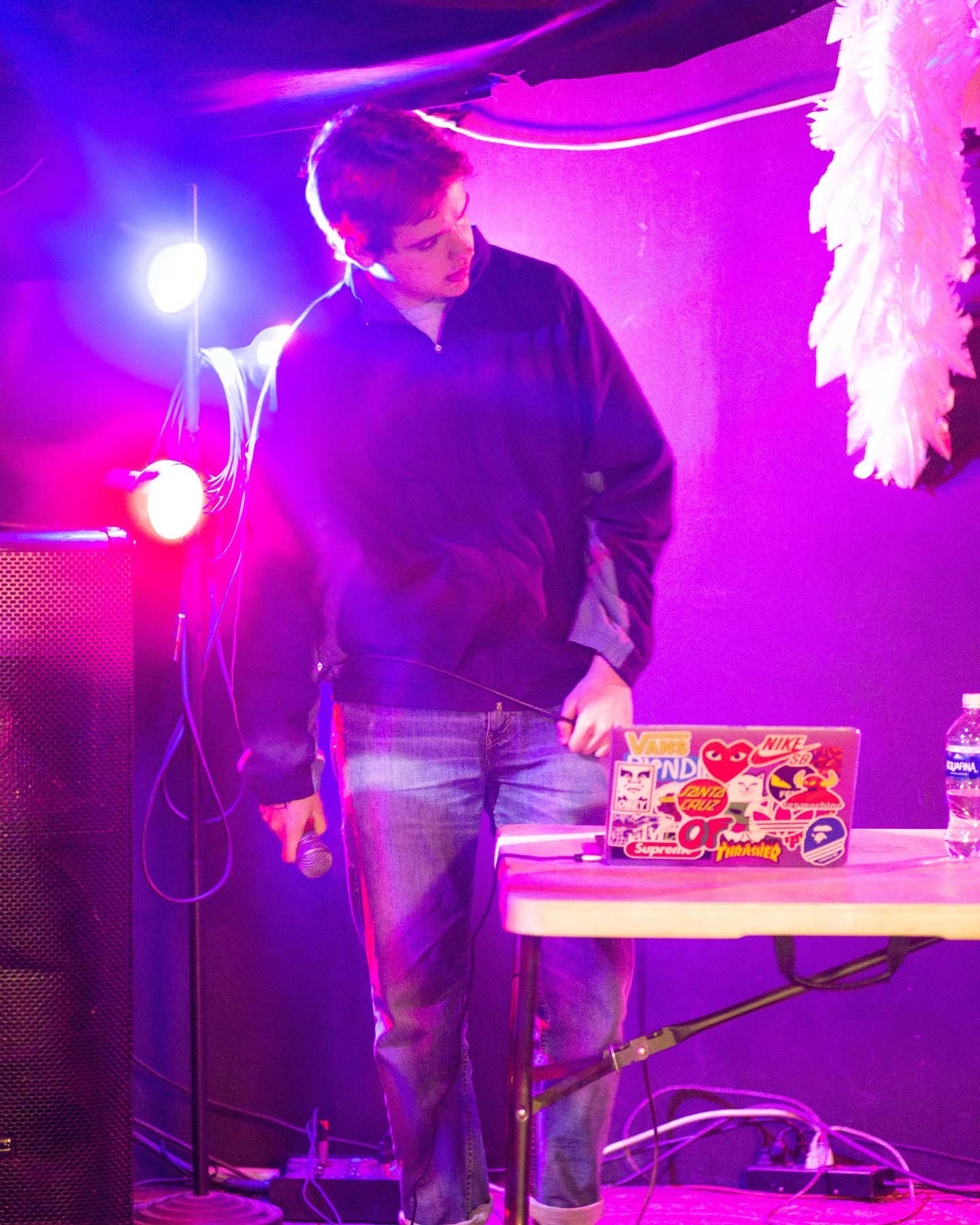 Users who see themselves as part of Alt TikTok “really fuck with the experimental stuff that sounds raw,” says Patterson from XIX.

For the music industry, one of the challenges of TikTok is that the app’s users latch on to songs — snippets, really — not singers. But artists who have been welcomed by Alt TikTok say the experience is less like being flavor of the week and more like becoming a part of a community.

“Having ‘Never Met!’ blow up through Alt TikTok has given me legitimate fans,” Cmten explains. “People are interested in the future of my music rather than just one specific sound. They’re genuinely interested in what I’m doing — and how I’m doing.”

The members of XIX feel similarly. “I don’t see anyone as my fans,” Patterson says. “They’re homies!” Calderon interjects.

Alt TikTokers who first encountered XIX through “molly rocks in my green tea” now interact with the group on other social media platforms. “I go live on my Instagram all the time and talk with people,” Patterson says. “I’ll have 30 people in there watching me brush my teeth.”

XIX recently played their music at a Subculture Party that brought in more than 300 virtual attendees — a feat that many artists with viral singles would have a hard time replicating, as they often have no link to any particular scene before their music becomes famous overnight. Calderon says XIX’s Subculture Party set “felt almost like a real show — we were sweating.”

Since Alt TikTok has become more influential, the mainstream it defined itself against has started to embrace it. “I’ve seen a very clear wave of the Alt scene becoming more mainstream,” Shepherd notes. “There are so many people who don’t want to go with the regular flow.”

This can lead to backlash. After a slowed-down version of “Never Met!” became popular on TikTok, Addison Rae, a mega-influencer, made a video using the track. “A bunch of people in the comments were like, ‘why did you steal our sound? This was not meant for you,’” Cmten says.

“It gets messy when Alt videos are served to Straight TikTokers,” acknowledges Max Bernstein, who runs the music marketing company Muuser and manages XIX. The Straight TikTokers “use the sounds and get confused when their comments are spammed with hate.”

Scenes that initially define themselves counter to the mainstream often have a way of taking over the very position they once opposed. And while major record companies aren’t usually known for supporting “experimental stuff that sounds raw,” they have followed Straight TikTok’s lead and taken notice of the music beloved on Alt TikTok, suggesting that what is underground for now may not remain that way for long. 645AR was signed by Columbia Records, while Cmten and XIX have also attracted major-label interest.

Bernstein believes this is the start of a much bigger movement: He predicts that the musicians who are championed by the Alt TikTok community are poised to crossover in the same manner as emo bands — My Chemical Romance, Fall Out Boy — that suddenly became million-sellers roughly 15 years ago.

“I was the frat boy at the Fall Out Boy show in 2006, so I know what it’s like to be on the other side,” Bernstein says. “And I can feel it happening all over again.”

Patterson calls the moment of transition “a little bit bittersweet.” But “it’s bound to happen,” he says. “When something is exclusive, everyone wants to be a part of it.”