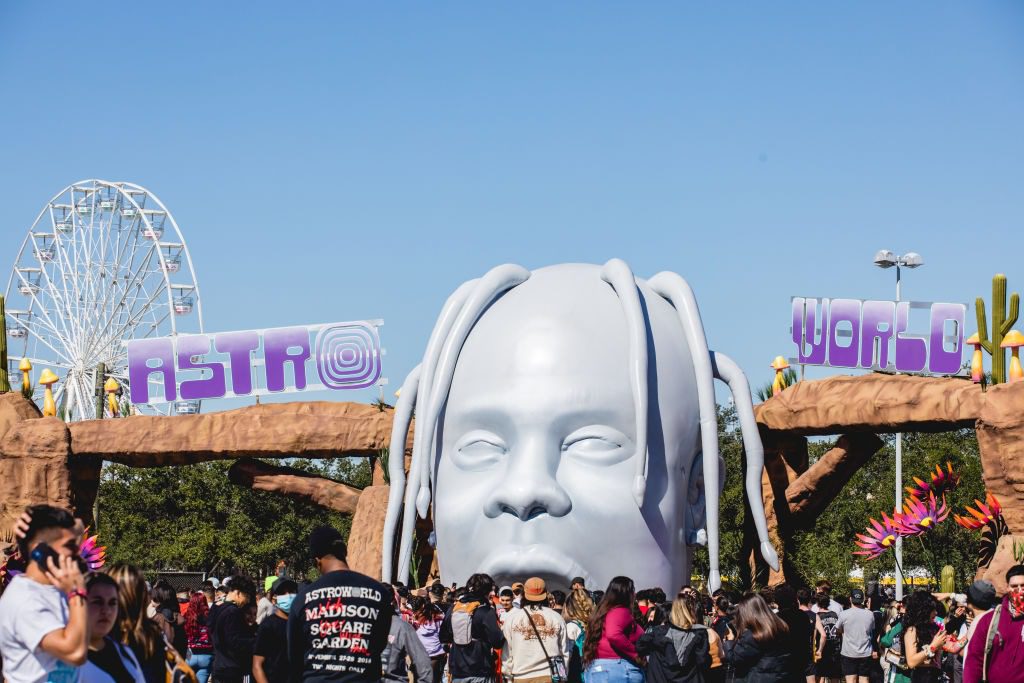 More than 300 people were treated for injuries following the incident, Houston Fire Chief Sam Peña said during a Saturday morning press conference, with 23 people taken to area hospitals, 11 in critical condition, including a 10-year-old boy.

The incident occurred around 9 p.m. during Scott’s set, with the crowd compressing toward the stage, causing “total chaos,” KHOU reported. “The crowd for whatever reason began to push and surge towards the front of the stage, which caused the people in the front to be compressed,” Peña said. “They were unable to escape that situation.”

Scott’s set at the sold-out festival was streamed live on Apple Music. According to CNN, Scott briefly paused his performance as ambulances streamed into the venue.

The concert was ultimately stopped by organizers and authorities, but by then “the damage had been done,” Peña said. The Saturday lineup of the two-day festival was also canceled.

“Our hearts are with the Astroworld Festival family tonight — especially those we lost and their loved ones,” organizers said in a statement. “We are focused on supporting local officials however we can. With that in mind, the festival will no longer be held on Saturday.”

Organizers continued, “As authorities mentioned in their press conference earlier, they are looking into the series of cardiac arrests that took place. If you have any relevant information on this, please reach out to Houston Police.”

Investigators will next look into “what caused, one, the issue of the crowd surge, and two, what prevented people from being able to escape that situation,” Peña added. While medical units were already stationed at the festival as a precaution, the available units were “quickly overwhelmed” following the incident.

“I’m sending investigators to the hospitals because we just don’t know,” Houston Police Department Chief Troy Finner said (via New York Times). “We’re going to do an investigation and find out, because it’s not fair to producers, to anybody else involved, until we determine what happened, what caused the surge.” Finner added that they had not yet identified all of the deceased.

Houston Police Executive Assistant Chief Larry Satterwhite, who was near the front of the crowd at the time of the surge, said it “happened all at once.” “Suddenly we had several people down on the ground, experiencing some type of cardiac arrest or some type of medical episode,” Satterwhite said (via the Associated Press). “And so we immediately started doing CPR, and moving people right then, and that’s when I went and met with the promoters, and Live Nation, and they agreed to end early in the interest of public safety.”

“I witnessed someone unconscious, struggling to get him out, like his friends were trying to get him out and just people weren’t caring enough to make a path,” festivalgoer Stephen Gutierrez told KHOU. “I’m a 400-pound guy. I jumped in because that’s just my instinct, and I just made a path for him.” Another attendee told KHOU, “In the front, there was a lot of jumping. If you didn’t jump, you would fall and get trampled on, definitely. The crowd is pushing back and forth. If you were even a little tired, you were going to fall.”

On the Travis Scott Reddit page, numerous users posted social media video of festival-goers attempting to stop the concert — including chants of “Stop the show!” — as well as fans who climbed the riser where the cameras were to plead with the cameramen to communicate the need to pause the concert. Those pleas were either ignored or, in one video, mocked.

Earlier in the day, video captured the crowd creating a stampede-like environment when hundreds of people attempted to rush through a VIP security checkpoint at the entrance of the festival — held outside at Houston’s NRG Park — trampling others in front of them. Some were detained and arrested, KPRC 2 reported, but many flooded into the crowd, which reportedly had at least 50,000 people. “We do know that we had people jump the fence,” Pena said.

Fans just broke through the fence to get into #AstroWorldpic.twitter.com/mpi70ZzTOs

Officials set up a reunification center at a nearby hotel for family members who had not been able to attendees of the fest, as well as provide counseling to those impacted by the incident. Friday’s festival lineup included artists like SZA, Master P, Yves Tumor, Toro y Moi, Roddy Rich, Lil Baby and the headlining set from Scott.

“Our hearts are broken,” Judge Lina Hidalgo of Harris County said at the news conference. “People go to these events looking for a good time. It’s not the kind of event where you expect to find out about fatalities.”

“The city of Houston extends our condolences to the loved ones of 8 people killed & several injured at [Astroworld Fest]” Houston Mayor Sylvester Turner tweeted. “Organizers held the event to bring people together for music, but it sadly ended in tragedy. Thanks to police, fire & other agencies that responded to assist.”

The incident is reminiscent of a pair of concert tragedies that resulted from crowd surges: In 1979, 11 people were killed prior to a show by the Who in Cincinnati after fans attempted to rush into the arena. In June 2000, nine fans were trampled to death in the mosh pit of Pearl Jam’s concert at the Roskilde Festival in Denmark.

This year marked the third annual Astroworld Fest; in 2019, three people were trampled and hospitalized with leg injuries at the Houston fest during the rush to get into the festival grounds.