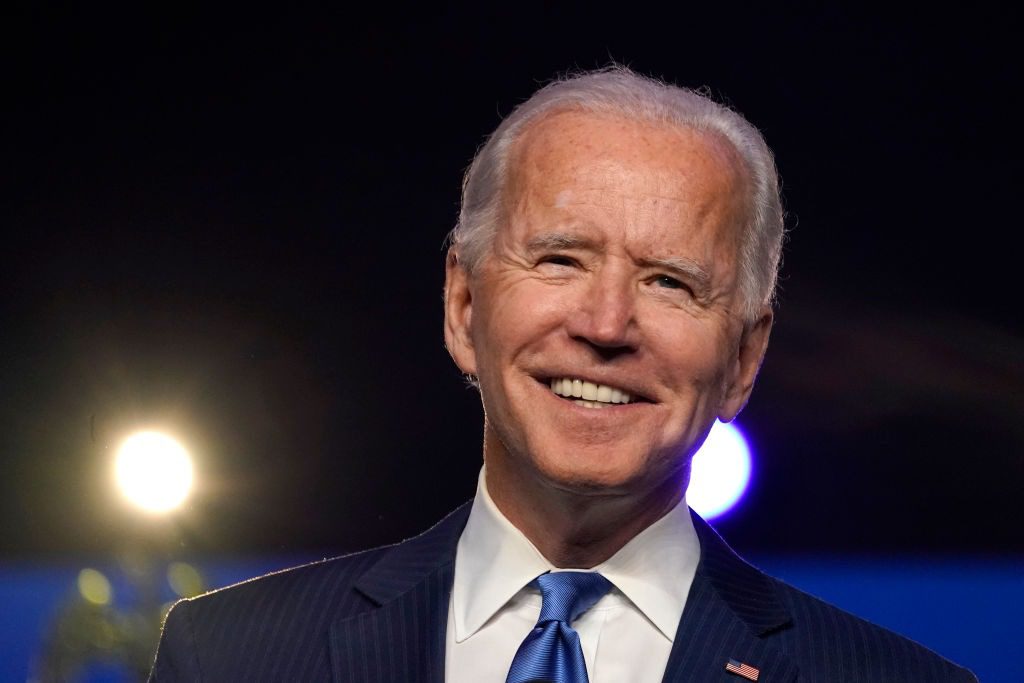 Everyone from Spike Lee to Thom Yorke has hit the streets — and Twitter — Saturday in celebration of Joe Biden, who was elected the 46th President of the United States after a lengthy week of vote tallying.

In a video shared to Twitter, movie director and producer Spike Lee shook and sprayed a bottle of champagne before a cheering crowd, while Ariana Grande tweeted: “CRYING Joe Biden Kamala Harris THANK GOD” with a chain of hearts. Grande previously endorsed Bernie Sanders for president — and cast herself as the resident of the White House in her new video for “Positions.”

Meanwhile, Radiohead’s Thom Yorke went for a more abstract response, tweeting, “Excuse me while I…” along with a clip of actress/swimmer Esther Williams rising on a column of water from the 1952 film Million Dollar Mermaid. Yorke recently tweeted of current President Donald Trump: “I don’t want my kids inheriting a world run by flag-waving Facebook tin-pot dictators, utterly bereft of moral authority, while they watch 200-mile winds pick up and blow their lives away like the Wizard of Oz, having internalized this force-fed sense of powerlessness. Just sayin’.”

R.E.M. shared their own obliquely celebratory tweets: a link to their 1988 song “Orange Crush” and a tweet reading: “BLUE since ’82!!!!” with the cover of their 1982 debut EP, Chronic Town. The band famously comes from Georgia, a swing state in this election that is currently trending blue.

excuse me while I …. pic.twitter.com/kZQvsxix7k

Actor Mandy Patinkin — who recently reunited with his Princess Bride cast mates for a table read in support of the Wisconsin Democratic Party — celebrated with a video of he and his wife, actress Kathryn Grody, dancing in Biden regalia. Patinkin has been using his Twitter to encourage voter turnout for months now, telling IndieLand: “If you are a citizen and do not exercise that power to vote, I am not exaggerating, that is a crime against humanity.” Considering this election had the highest voter turnout in the last 120 years, Patinkin has a lot to dance about Saturday.

Joan Baez shared her own dancing video, writing: “This morning’s mood… the sweetness of victory — and groceries.” While Miley Cyrus shared a clip of her 2009 song “Party in the U.S.A.” scoring Trump’s exit from office.

This morning's mood… the sweetness of victory – and groceries. pic.twitter.com/GIJjargGmR

Demi Lovato posted a photo with Biden, writing: “Our 46th president, Joe Biden!!!! I’ve been waiting to post this photo because I knew deep down you would be our next president. Today we celebrate the millions of Americans who overcame barriers to the ballot box, mobilized their communities, and voted in record-breaking numbers. This was OUR election and WE WON TOGETHER. There’s still a lot of work to be done, but today we will celebrate each other.”

Lizzo, for her part, took to Instagram to post a tearful video in which she said: “There are few times in this country where I’m hopeful. It feels like every time I’m hopeful, it gets taken away for me. And this time I was hopeful and I was scared and I think Trump is out of office.” In her caption, she wrote: “Let’s get to work, America. It’s time to hold the people in charge accountable. It’s time for them to listen. And it’s time for actual change in our policies and practices.” She then posted a video on a jetski captioned: “BYE BITCH 2020.”

Louis-Dreyfus became a meme this week when a clip from an episode of her show Veep titled “Nev-AD-a” made the rounds in which her character demands a recount in the swing state to secure the presidency. In the next few episodes, her supporters chant either “stop counting the votes” or “count the vote,” depending on what would serve her best. Sound familiar? Biden took Nevada with 49.9% of the votes.

Billie Eilish marked the news with a masked video, stating, “This is unbelievable, I am so happy” — she also gave a mighty roar and thanked everyone who voted. She previously denounced Trump and performed “My Future” at the Democratic National Convention. “You don’t need me to tell you that things are a mess,” she said. “Donald Trump is destroying our country and everything we care about. We need leaders who will solve problems like climate change and COVID, not deny them.”

Comedian and Borat star Sacha Baron Cohen also took to Twitter to revel in Trump’s loss, writing: “Donald— you’re out of work and I know I offered you a job. But your performance this past week was tragic and sad. Offer rescinded.” After Trump lashed out at the actor following the premiere of the Borat 2 — which wryly eviscerated the president’s supporters and his attorney, Rudy Giuliani — Cohen previously tweeted: “Donald — I appreciate the free publicity for Borat! I admit, I don’t find you funny either. But yet the whole world laughs at you. I’m always looking for people to play racist buffoons, and you’ll need a job after Jan. 20. Let’s talk!”

Barbra Streisand offered a more uplifting message: “Congratulations to Joe Biden, Kamala Harris, and our beloved country. Honesty and integrity won out!” along with a video of her performing “Get Happy/Happy Days Are Here Again.”

Congratulations to @JoeBiden, @KamalaHarris and our beloved country. Honesty and integrity won out! pic.twitter.com/RlaZr88O0R

Cher, being Cher, tweeted an emoji-packed message: “Can’t believe it. I’M SO SO, SO, SO HAPPY [crying emoji] It would be easy to post horrible pictures & cartoons of Trump, but knowing Joe, he really means what he says about being the president for EVERY [American flag] & as tempting as it WOULD BE, OUT OF RESPECT FOR JOE I WON’T POST.”

Mick Jagger took to Twitter to say what many of us are probably thinking: “I’m so looking forward to coming back to an America free of harsh words and name-calling and be amongst people who I know have common ground and harmony. It’s a challenge but it can be done!” This definitely calls for some “Dancing in the Streets.”

This is a developing story…

Brittany Howard and Margo Price on Fishing, Life in Quarantine, and Social Change