The running joke among a particular set of internet-addled adults in New York this summer is that the vibes have been, for lack of more precise phrasing, off. As quickly as one might’ve fired off a flippant Tweet about our collective cultural malaise, prestigious media organizations dedicated many thousands of words to the “Hot-Vax Summer” that never was. Indeed, with Covid cases on the rise, thanks to the viscously infectious Delta variant, a lingering sense of despair appears to have calcified in the atmosphere. Still, it’s a mistake to base your understanding of the world on what people are saying online. The vibes couldn’t be better for the city’s youth, who have become empowered to basically do whatever the hell they want.

On an uncharacteristically breezy July evening, I found myself among scores of young people discreetly making their way onto a school bus lot in Brooklyn. Something like an impromptu music festival, most of them had trekked across the Williamsburg Bridge, from Lower Manhattan, where the New York-based rap collective Surf Gang was slated to host a party at the skatepark colloquially known as “LES.” As the story goes, someone snitched, and by the time they arrived to set up, the police were there to harsh the vibe. Of course, the members of Surf Gang had a backup plan — a very good one at that.

At the center of the expansive dirt lot, a rental truck and a pile of generators served as the North Star for a wandering crowd of teens. The pitch-black scene made for a kind of positive phototaxis, with the crowd gravitating towards the LED lights on the makeshift stage like moths doused in internet drip. The audience, which consisted of roughly 500 people, was reflective of a demographic that is both heavily influenced by online culture and unintelligible to the kinds of adults who profess to understand internet trends. They were diverse in style and identity — kids with jet black hair and platform shoes paired with ostentatious rap-inspired chains; skaters in baggy silhouettes wearing eyeliner and pearls, grasping their boards like battle axes; someone in a Pokémon trucker hat paired with vintage Bape jeans and motorcycle boots, my favorite look from the night. 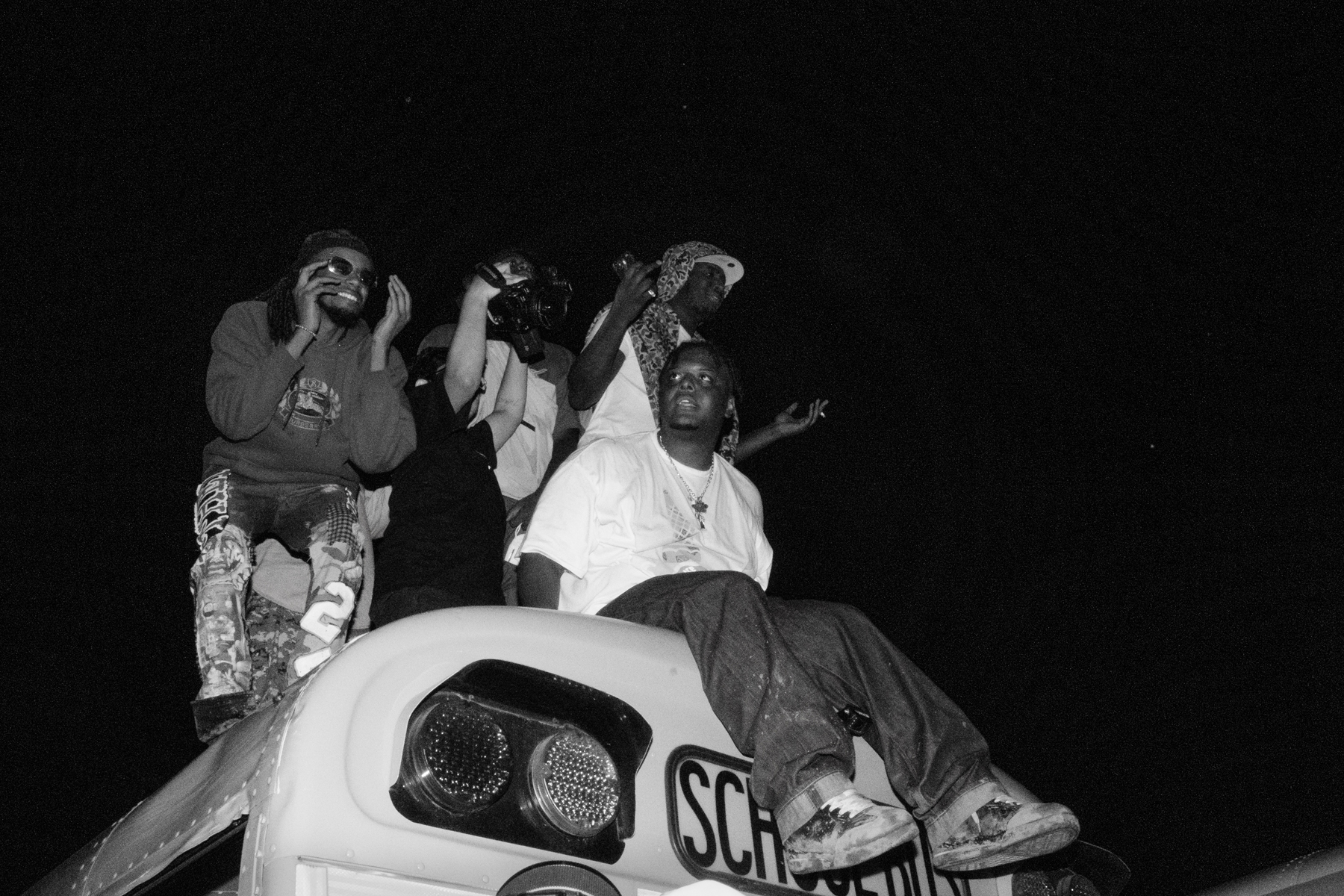 Like the crowd at their show, Surf Gang belongs to the currently ascendant generation, accustomed to an unimaginable breadth of information online, and innately resistant to categorization. Musically, they’ve managed to synthesize every influence under the sun. Surf Gang Vol. 1, the compilation for which this clandestine affair was meant to celebrate, contains flourishes of trap, emo, house, and everything in between. It has a more ground-level sensibility than the music often touted as being representative of today’s youth, which might be why the crowd seemed so genuinely excited to be there. That, and the fact that the whole thing was brazenly unsanctioned. You could feel a kind of latent thrill the entire night, wondering if each new glob of guests would be accompanied by the police (the cops did eventually show up).

A few days after the party, I met roughly 80 percent of Surf Gang’s roster at their studio near Times Square. (Yes, the current vanguard of Gen-Z rap in New York occupies a studio in Times Square.) In the smoke-filled room, I’m greeted by an almost overwhelming cast of characters. They introduce themselves with monickers that would make for perfect AOL usernames: Polo Perks, Moh Baretta, Caspr, Pasto Flocco, Jdn, Harto Falión, Gonerprod, Harrison, Eera, Tommytohotty.

Surf Gang’s main producer — they all make beats in one form or another— is Evilgiane. He’s seated at a table in the center of the room, almost like the group’s leader. Fitting, given the fact that when I ask the crew how they all met, their arms raised in unison pointing at the 24-year-old Brooklyn native. For what it’s worth, Evilgiane describes the music that Surf Gang makes as “post-apocalyptic rap.” 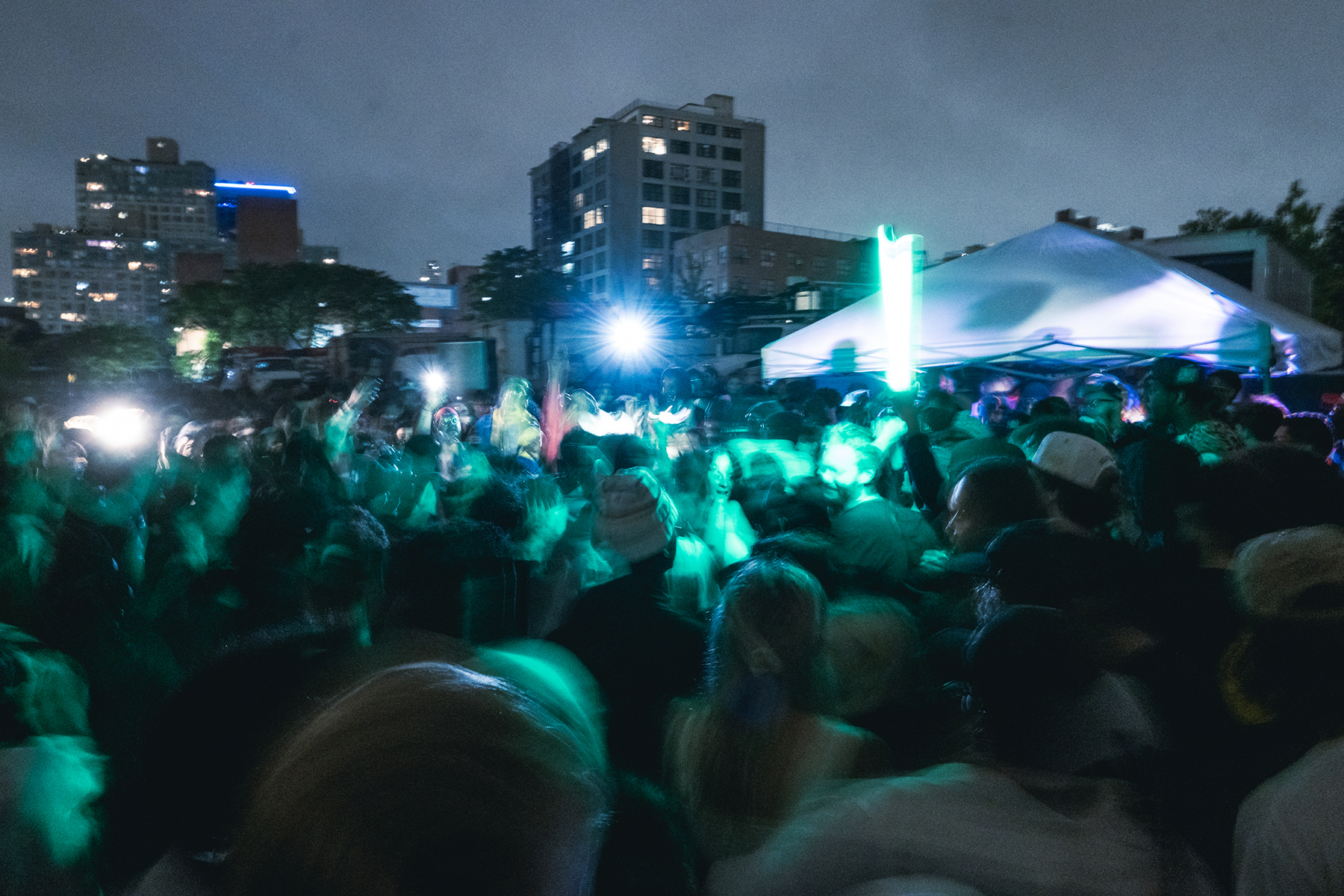 “We don’t even consider any genre, because we take a lot of influence from every genre and we just create what we do,” he continues.

Both of Evilgiane’s parents were musicians. His father was a producer and his mother a songwriter. He recalls stories his mom would tell him about when he was a baby, sitting in a car seat at the studio while his folks worked. But he didn’t take a liking to production until later in his teens, after messing around with various apps on his phone, somewhat stumbling into a fanbase. “I used to make beats on my phone and shit before I even knew about programs like Ableton and shit like that,” he says. “I didn’t have a laptop. It just got 1,000 plays on SoundCloud or some random shit. And from there, I was just like, ‘Yeah. Honestly, I kind of fuck with this shit.’”

The members of Surf Gang are all in their early to mid-twenties, and most met around 2017 while hanging out at LES skatepark. One by one, they explain, their clique grew. At that point music was a less-serious practice, they’d mess around with recording software, making a slew of tracks mainly for themselves. “It was [during] Covid that things started to noticeably change in terms of people listening and shit,” Harrison, a soft-spoken producer for the crew, says. “I feel like we’re just seeing everything that would have happened.”

The musician Caspr, who has the tattooed look of the SoundCloud generation, met most of the crew within hours of arriving in New York a few years ago. As a musician, he’s got a buzzing solo career of his own, having recently collaborated with pop-punk soothsayer Travis Barker. It’s another unique quality of Surf Gang as a collective. They don’t move as a single unit. Several members have record deals independent of Surf Gang. It makes trying to fit them in a box almost impossible, which I get the sense is the whole point.

“We all just love making music, period. So it’s just fun when we actually create the shit that we do,” Evilgiane says. “A lot of the shit sometimes would be either by accident or just a joke that became real. No one really even wants to get on beats until they get on it, and then it becomes a thing. Everyone’s just trying something new. Trying to keep it refreshing.”

And for a bunch of artists under the age of 30, they seem to kind of despise the internet, which, OK, is fair. 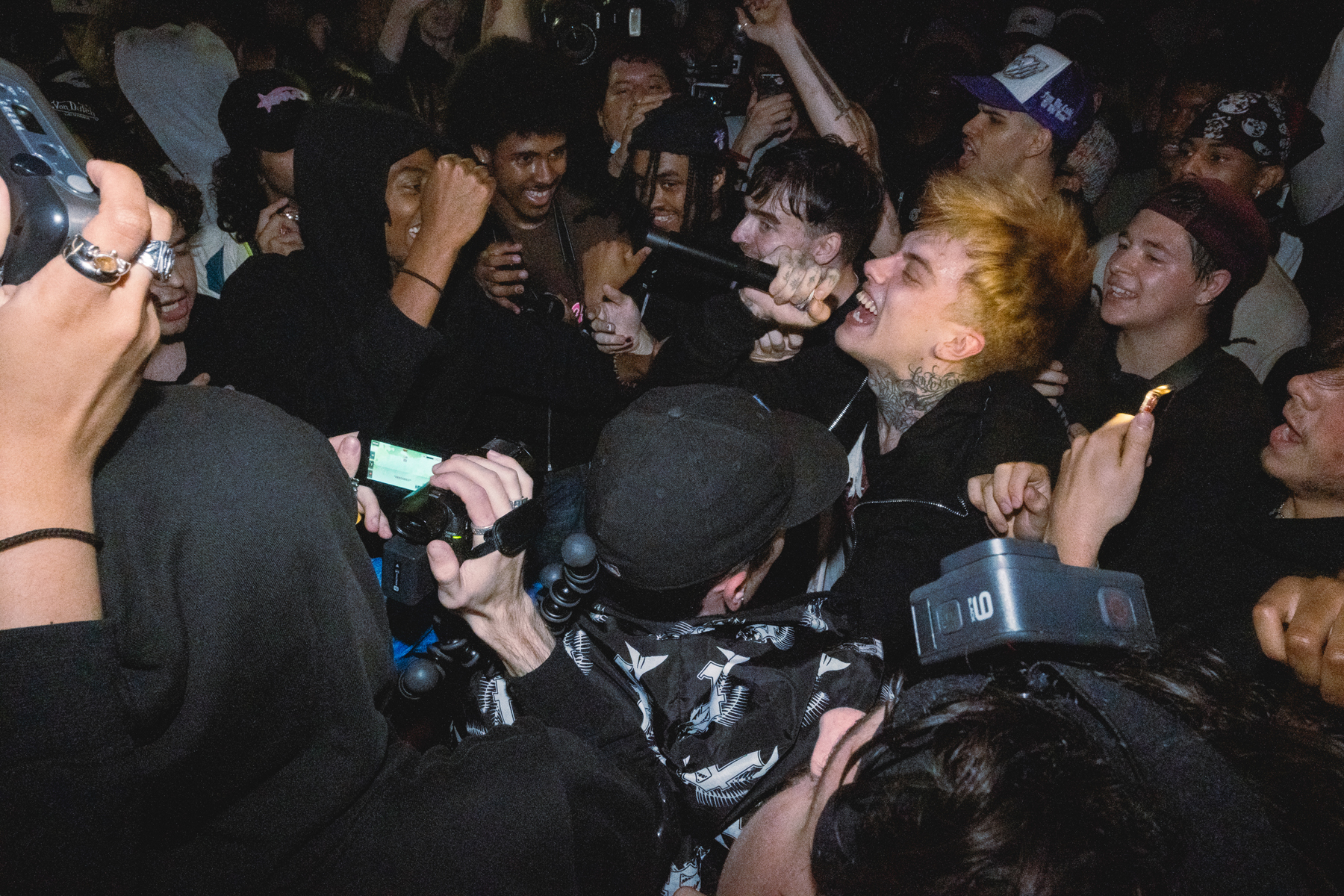 Caspr of Surf Gang performs in Brooklyn in July 2021

That commitment to in-person connection speaks to the ways in which the members of Surf Gang manage to support one another. The music on Surf Gang Vol. 1 has moments of genuine vulnerability. Closing track “Problems,” featuring Bobainee, chronicles the rapper’s internal struggles over a Harrison-produced beat that feels like the most somber moment of a Playstation RPG in the best possible way.

“When it comes to music, I look at that as an opening for me to get shit off my chest. So a microphone is like my journal,” Bobainee explains. “I look at it as me just speaking about real-life situations and stuff. I’m speaking to everybody, not just me too. That’s as real as it gets.”

The strength that comes from a real-life support system is invaluable. “Just me being around my friends, it showed me that I’m not just the one who goes through shit. If everybody in the group is going through something or whatever, imagine the whole world. There could be other people going through things too,” he adds.

Moving as an amorphous multipronged collective doesn’t come without its challenges, of course. The group lets out a collective laugh when Evilgiane describes their biggest problem as getting places on time, which one imagines would be a nightmare. Dealing with so many people is also bound to come with moments of friction. “We’re like a family and with each other all the time. So obviously, we’re going to get tired of each other and let each other know,” Evilgiane explains. But they’ve gotten good at communication. At their studio, it almost feels like the kinds of radical collectives from the Sixties, dedicated to toppling oppressive structures like capitalism, white supremacy, and the patriarchy.

“I definitely trust all our tastes the most,” Harrison adds.

Towards the end of our conversation, Polo Perks, who stands nearly a foot taller than any other member of the crew, bursts into the room. At age 26, he’s something of an elder within the crew. He was also the closing act at the concert in Brooklyn, performing his set atop a school bus in what will likely go down as one of the more iconic moments of this so-called Hot-Vax Summer.

Polo has perhaps the most traditional rap background of anyone in the room. He says he’s been rapping seriously since he got out of high school, around 2015. At that age, he says, he was listening to “super-duper amounts of Big Sean.” Polo was also an acolyte of Pharrell and the Neptunes, as well as “mad rock music.”

Polo was born in New York and lived briefly in Connecticut before moving back to the city. He raps in a melodic baritone, almost as if Z-Ro made the kind of punk-inspired rap that acts like Playboi Carti are known for. On standout track “2 Much Goin On,” he’s joined by Caspr for what could be seen as a distillation of Surf Gang’s whole ethos. The song could make its way onto a playlist inspired by Blink 182 or Taking Back Sunday, as well as a mix of Lil Uzi Vert or Young Thug. It’s not as simple as them mixing disparate genres, but something more fluid.

“I feel like if you was looking at a room a couple of years back and it was a group, we all would be symmetrically dressed and have the fucking same ego, same energy, everything,” Polo says. “Now, everybody’s one individual person, and people accept that.”

“Now, there’s just more freedom in music anyway,” Evilgiane adds. “It’s more socially accepted to not write and shit like that and just do whatever you want. There are some people that literally just screech on tracks and shit and some people fuck with it. It’s art like everything else. It’s in the eye of the beholder. You judge what’s music to you.”

A word that comes up a lot during our conversation is “humble.” The members of Surf Gang have a refreshingly patient outlook on what they’re doing. Never mind the fact that Drake follows Evilgiane on Instagram, or that their party in Brooklyn remains the talk of the town nearly two months later. They maintain that they are simply a group of friends having fun and taking things as they come.

At the show in Brooklyn, I noticed the menacing luxury towers that now dot the New York skyline. Where a previous generation lamented the pace and force of change in the city, these kids seemed palpably unbothered. This is simply the city they inherited. A city where, thanks to foolhardy developments that nonsensically carve away some parcels of land and leave others vacant, you can have an illegal function go into the early morning unnoticed. I see one attendee make the mistake of looking at the damage the muddy ground has done to his Jordans. “Fuck it,” he says, before jumping back in the mosh pit. The vibes are great.