“Do you remember Limited Too?” Pearl Charles asks. She’s trying to trace just how far back her love of ABBA goes, which brings her to the Nineties pre-teen clothing store. “Everything was flower power and bell-bottoms, and I feel like ‘Dancing Queen’ was huge at all the birthday parties. All of that stuff steeped into my brain when I was a little kid, and now it’s all coming out.”

“Only For Tonight,” the opening track to Charles’ recent album Magic Mirror, drips in disco. Its layers of sunny production mask bleak lyrics, like gloomy clouds that she tosses aside with one hand, champagne in another. “Didn’t I know, wasn’t made for a one-night stand,” she sings. “Why did I play this like a man?”

“This is a feeling so bygone now for everyone, since no one’s really having one-night stands,” says Charles, 29. “But you wake up the morning after and you’re like, ‘Oh, I don’t know about that. Was that the right decision?’ The lyrics have some thinly-veiled drug references. It’s about the morning after and the regrets.”

Charles is calling from Landers, California, a desert town close to Joshua Tree. She recently moved there from Los Angeles with her partner, singer-songwriter Michael Rault. They have no neighbors — save for the occasional coyotes and roadrunners in their yard — and are free to play music all night. “It’s nice to feel more connected with nature and really be able to see the Milky Way,” she says. “It makes you feel like you have your little place in the world.”

Charles took the disco glitter a step further with the video for “Only For Tonight,” shot on a rotating stage that made her feel like she was on a Seventies TV show. Another video, for her mellow, introspective track “Imposter,” stays in that decade but veers into country rock, as she holds a gun in a cowboy suit. Throughout the album, she expertly blends together these two elements to create a cosmic country mirrorball vibe, like if ABBA and Gram Parsons had a baby.

“I really like mixing those aesthetics,” she says. “Those two things go so well together. A bit of that exists from the era, but to be honest, there’s not that much.” Her music also contains tinges of the present —particularly the groove-laden “What I Need”— that rule out any labeling of her as a throwback artist. “I think I’m carrying the torch and bringing those sounds and those ideas forward, but I’m all about being here now,” she says, citing Eckhart Tolle and Ram Dass as inspirations to stay focused in the present. “So even though I take inspiration from it, it wouldn’t be authentic if I tried to make it sound like it was the Seventies, because it’s 2021.” 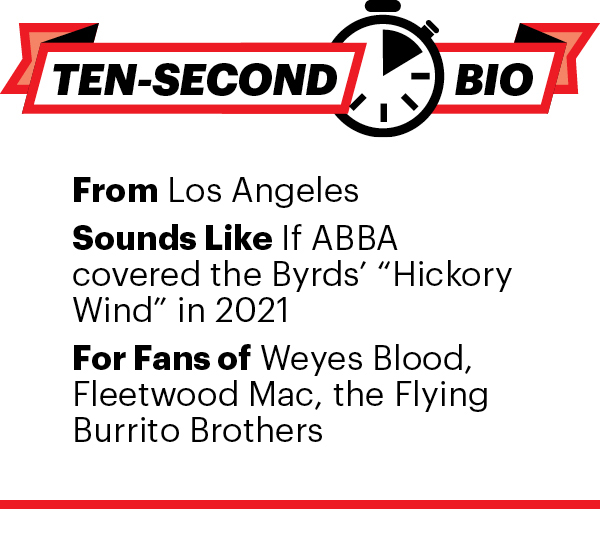 Charles completed Magic Mirror just before the pandemic, shelving it until this January. She met Rault halfway through making the album, which ended up with a semi-accidental chronological throughline: It begins with “Only For Tonight” and “What I Need” as she grapples with a hard breakup, partying and being single. She searches for herself in the middle of the album, and by “All the Way” she’s started a new relationship.

“My dream is to live and breathe music with my partner,” says Charles, mentioning Richard and Linda Thompson, Paul and Linda McCartney, and Fleetwood Mac as acts she looks up to. “I feel like I’m really lucky to get to do that now.”

Charles initially wrote “Take Your Time” about someone else who found success, but she soon realized it was about herself and the concept of “smelling the roses.” “As Long As You’re Mine,” the album’s bluesy, final track, was inspired by Bonnie Raitt. “I would love to write a song that’s as emotionally hard-hitting as ‘Nick of Time,’” she says. “That’s one of the best songs ever written. I cry every single time I hear it. But in this case, we put a cheeky, lighthearted spin on this idea of, ‘If the world’s ending, it’s going to be OK, as long as we have each other.’”

Charles began playing piano at the age of five, growing up a block away from the counterculture mecca of Laurel Canyon. “That was my fate,” she says with a laugh. “There was no way for me to avoid it.” Her father, Larry Charles — who directed 2006’s Borat and wrote for Seinfeld and Curb Your Enthusiasm — encouraged her to pursue the arts, but also to go to complete her education. “Growing up in L.A. and having my dad be in the industry, I went to school with, like, Billie Lourd and Lily Collins,” she says. “They’ve gone on to be movie stars, [and] I desperately wanted to be a professional actress and musician growing up. My parents would not let me. They were like, ‘You have to go to school. You have to go to college. You have to do all of that.’”

Charles met producers and managers over the years, but had no interest in being turned into a pop star. After getting kicked out of her musical theater group for smoking pot in high school, she joined the school’s jazz band and found a passion for playing with others. While attending Cal Arts, she formed the country duo Driftwood Singers with Christian Lee Hutson, her boyfriend at the time. “That was the first real foray where I felt like I was in control of the artistic vision and the plan,” she says. “And not just a young teenage girl that had some weird older male manager trying to tell me what to do.” 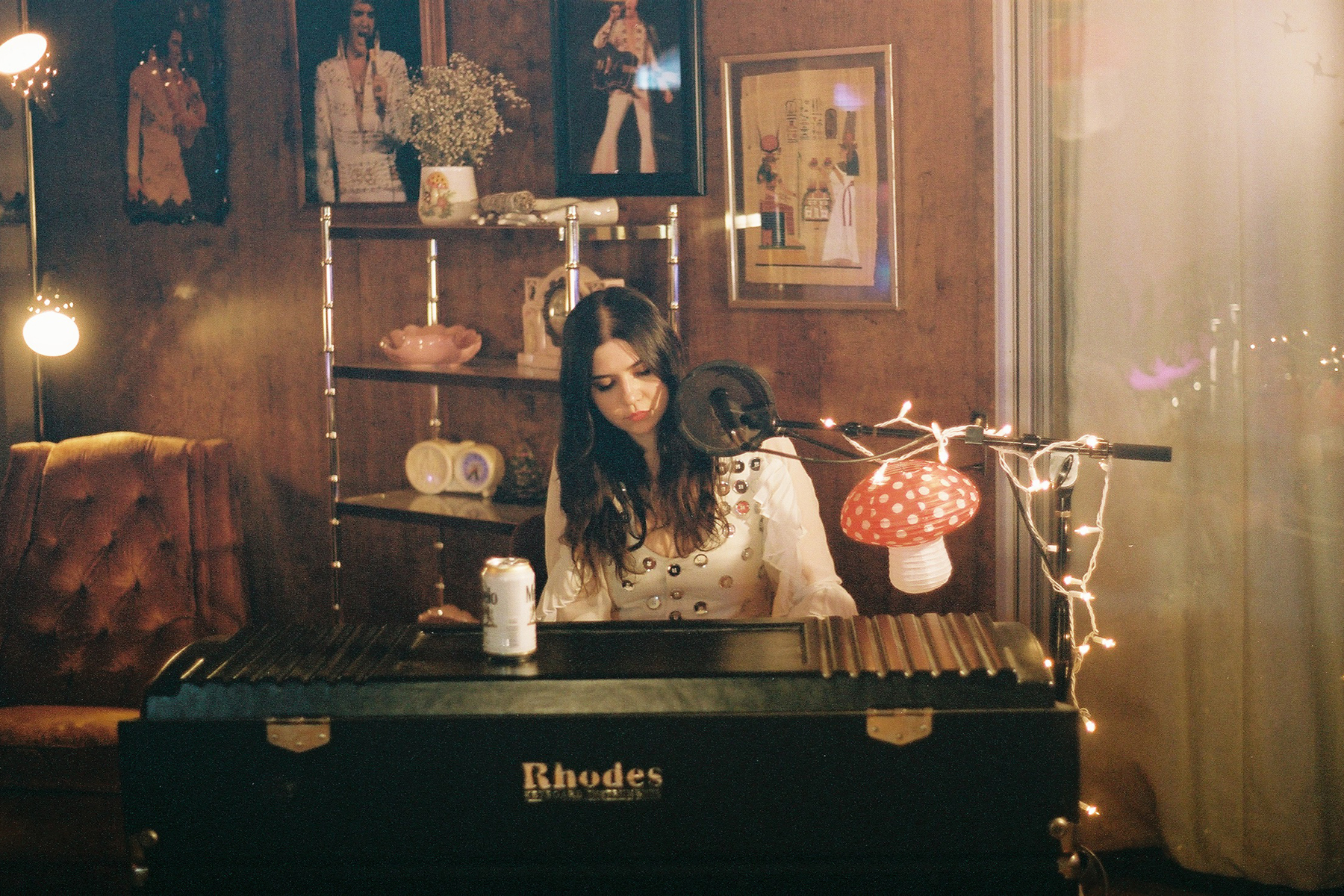 Hutson introduced Charles to the music of Parsons, which continues to inspire her today — especially while living in the desert. “I found myself really drawn to his music,” she says. “I figured it all out: the spirit of Gram Parsons is here and he’s driving people, or me anyway, down this path.” The duo disbanded when they broke up, but Charles says they’re on good terms. “I’m so happy for all of his success,” she says of Hutson, who’s since gained recognition for his work with Phoebe Bridgers and his recent solo music. “We both worked so hard for so long, and it’s really rewarding to see that be appreciated.”

When she was 22, Charles became the drummer of the Blank Tapes, a Sixties garage rock band signed to Burger, the Southern California label that shut down last year after a wave of misconduct allegations. (She jokingly calls it “the record label that shall not be named.”) Charles left the band after breaking up with frontman Matt Adams. “It’s so funny, how much the truth of the matter has to do with my romantic relationships,” she says. “But what can I say? I’m a sensitive gal.”

After that, Charles went on to embark on a solo career, which she’d previously been afraid to do. “I let myself be in the shadow of men who were my boyfriends,” she says. “That’s a somewhat natural thing, but as we’ve gone into a new century, things are really changing. I simultaneously found the confidence within myself and the world was there to support me. The time had come, the stars aligned.”

She released a self-titled EP in 2015 — with a cover of her coolly smoking a joint — followed by 2018’s Sleepless Dreamer. Charles feels like she’s honed in on her songwriting on the new album: “On Sleepless Dreamer, the songs were about what was happening to me, and Magic Mirror is more about how those things make me feel,” she observes. “I think that’s like life. You can look at things on the surface or you can dig a little deeper, and then you’re probably going to get something more fulfilling and rewarding. But it’s a little scarier.”

Charles dug deeper by using psychedelics, which allowed her to tap into her subconscious and reach a higher level of creativity. “I wrote ‘Imposter’ entirely on mushrooms,” she says. “It’s very effortless, and it feels like it is coming from a place beyond you. I’d love to take the credit and be like, ‘I wrote that song,’ because I did. But I’m just, like, the human conduit for the message.”

Charles came up with the title for Magic Mirror in a dream, after she asked the universe to bring her a song in her sleep. “Magic Mirror represents both what we would like to see within ourselves, but also what’s really there,” she explains. “So it shows the good and the bad simultaneously. Ultimately it’s a really hopeful idea, because whatever you want to be is attainable. … Searching for yourself and becoming the best version of yourself is a lifelong pursuit, and I would hope that we don’t give up on it.”

In between performing livestreams and delivering weed (her side gig), Charles is working on new music out in the desert. “Some songs take me years to write, some songs just fall out of me in a day,” she says. “That’s where the cosmic part comes in. It’s cosmic country because the universe is weighing in. The songs, they speak for themselves. I just tell it like I see it, man.”