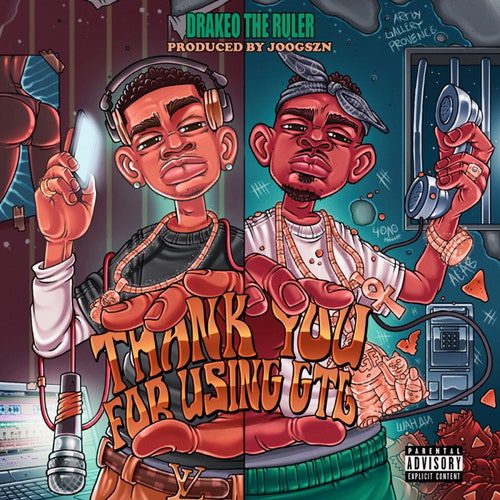 Drakeo the Ruler is fighting for his freedom a second time in two years. After being found not guilty on charges of murder and attempted murder last year, he is again awaiting trial. The Los Angeles County district attorney refiled charges of criminal gang conspiracy and shooting from a motor vehicle; the case against him is bogus and racist, but Drakeo won’t let it stop him. He continues to make music, knowing that his music is an affront to his prosecutors and jailers. “I’m not involved in the shit I’m on trial for,” he said in a recent press release. “They are using their wild imagination against me.”

“Backflip or Sumn,” from Drakeo’s new mixtape, Thank You for Using GTL, dares to imagine a space where the rapper is unconfined. On the tape, which is named after the telecomm service used to record it from inside LA County’s Men’s Central Jail, he recreates vivid scenes from life on the outside. He refuses to let the court system decide who he gets to be in his music, where he conjures images of his outsized rap celebrity: back-to-back Ferraris, duffel bags filled with cash, lounging around bored in strip clubs. Here, he’s the man who beat a murder rap, not the criminal the state has made him out to be. His rapping has never sounded more vital, and there is something powerful about an artist whose lyrics have been used against him in court continuing to rap as he always has, even through a prison phone. He encapsulates this point in one line: “If art imitates life, you should probably panic.”

Even through the phone, Drakeo’s off-kilter flows jump out of the pockets. He bobs through these verses unfazed. Not even the muffled receiver can neutralize his calm delivery, and the circumstances don’t change his nonchalant yet controlled demeanor. “We double-parked outside your house, don’t be instigating/You an insta-hater/I told him take these headshots, it’s gon’ get you famous,” he raps. The slow-building JoogSzn production rolls out beneath him like a red carpet, and the beat whines as he raps about the 2Greedy indictment and facing the state; it’s as if the stakes are made clear twice over. But in the face of this adversity he remains at ease. The dazzling world within his memory palace is far too vast to be suppressed.

Alex The Astronaut – The Theory Of Absolutely Nothing