It was a minute to game time on Saturday, Nov. 13, and both sides of the bleachers at Delmar Stadium in Houston were standing together in silence.

A week after a crowd surge killed nine teenagers and twentysomethings at Travis Scott’s Astroworld Festival — including four people from the Houston area — local high schools Memorial and Heights High were facing off in a win-or-go-home playoff football game, the highest stakes either team has faced all season. But in a state where high school football notoriously reigns supreme, the game itself felt comparably small.

That’s because last week’s festival disaster took the lives of two of their own — 14-year-old Memorial High School freshman John Hilgert and 16-year-old Brianna Rodriguez of Heights High, the two youngest victims of the tragedy.

With encouragement from the schools, student bodies, teams, and victims’ friends and loved ones, much of the crowd came to the game dressed in pink or green, Rodriguez and Hilgert’s favorite colors. Cheerleaders waved pink and green pom poms, Memorial’s marching band wore bright green shirts underneath their black overalls, while Heights’ band wore pink and green bandanas and armbands. Many of the Heights football players sported bright pink socks or towels with their uniforms, and they wrote Rodriguez’s initials on their pads. Rodriguez was also named an honorary Heights cheerleader.

“I’m glad this is how the community is responding,” 17-year-old Memorial High senior Ryan Gholson, who wasn’t close with Hilgert but knew of him, told IndieLand. “We had people in our classes there, some people didn’t make it back. I still don’t really know how to describe it other than it’s crazy.”

One of Rodriguez’s friends at the game, a 16-year-old who had known her since middle school, struggled with the fact that her friend isn’t coming home. (She declined to be named in this article.) “I feel guilty that I get to wake up and she doesn’t,” she says. “I feel we’re all still trying to accept the fact that she’s gone.”

Rodriguez’s friend isn’t alone. The day the victims were announced, Gholson learned he shared a birthday with Hilgert. “It could’ve been any day, it was my birthday, I didn’t know how to react to it. These are a lot of kids just like us, all very young, it’s a crazy feeling to see that. For days, it was quiet at school, I feel like everyone felt guilty to have a good time at school. I feel bad for laughing at school, I feel like I needed to just be quiet. It’s gotten a bit better, but now whenever someone brings it up, I’ll give a moment of silence for him and for his family.”

Grief permeates the event, but there’s also resilience. Resilience among the parents, teachers, and other community members who’ve had to lay their children to rest and help guide young ones through times of unprecedented anguish — and among the high schoolers who’ve had to grieve for a friend and come to terms with the concept of their own mortality far sooner than they ever should have.

The two youngest Astroworld victims were bright and lively, to hear their friends and classmates tell it. Rodriguez loved to dance as part of her school’s dance team, the Redcoats, where she met several of her closest friends. She enjoyed listening to Megan Thee Stallion, and she was the life of the party. She had an irreplaceable bright smile and laugh, and she accepted people as they were and didn’t care about status.

“She cared about everyone, she accepted everyone,” her friend said. “I think about her every morning, and I’ve been starting to feel better. I’m finding more peace focusing on the positive things. I’ve been seeing butterflies, and that makes me think of her. It rained really hard on Thursday; that made me think it was Bri getting into heaven.”

Despite mounting questions about the tragedy and how it happened, Rodriguez’s friend isn’t concerned with anything other than ensuring Brianna gets her due — and that this never happens again. “I don’t need to know anything,” she said. “I just want justice.”

Hilgert was a hardworking baseball player who was just starting high school, he was funny; he could make an entire classroom laugh. He lived life to the fullest. As fellow Memorial freshman Luke Fuqua, a 15-year-old who went to school with John since middle school, said: “He was a really, really funny kid. He was a great guy and he didn’t deserve what happened to him.” 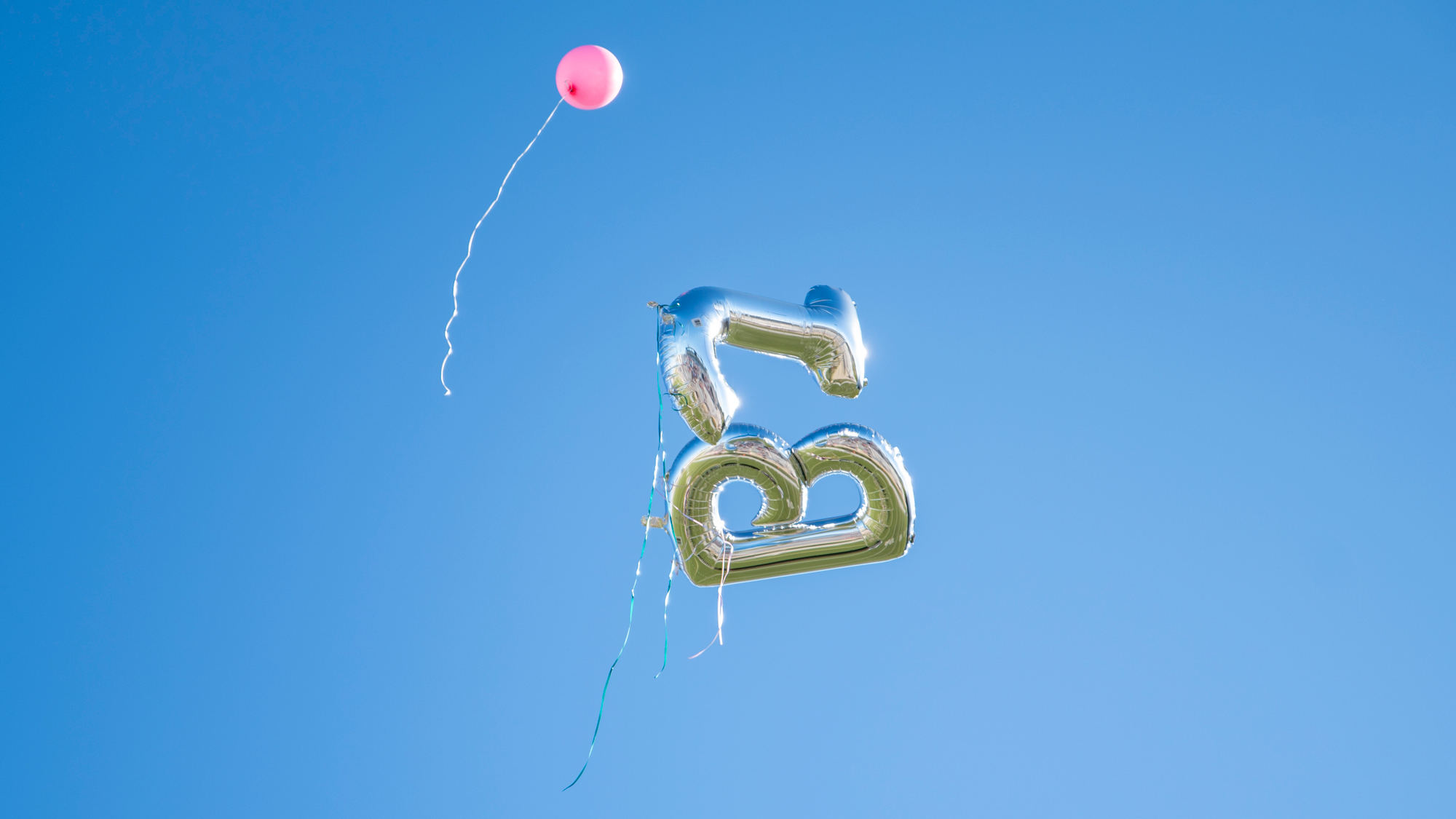 At halftime, friends of both Rodriguez and Hilgert came to the field, bearing posters commemorating the two, along with balloons bearing their initials and flowers. They released the balloons into the air as Rodriguez’s Redcoats took formation on the field.

Even before Saturday’s game, Rodriguez and Hilgert’s respective communities showed up to support the teens and their friends and families. Each high school held vigils and memorials for their students, as Memorial High placed green ribbons around the school in John’s honor and Brianna’s school decked itself out in pink.

Hundreds of people attended Rodriguez’s vigil on a gusty Wednesday evening outside Heights High on the school’s track field, where students, faculty, and parents gathered alongside government officials — including Mayor Sylvester Turner and Congresswoman Sheila Jackson Lee — in honoring Rodriguez. Attendees at the vigil blew bubbles, lit candles, and released pink and white balloons to the air in Rodriguez’s honor. One by one, Rodriguez’s friends took to the microphone to celebrate Brianna’s life, several finishing with the same statement: “Long Live Bri.”

“Nothing has felt the same without her,” Natalie Gibbs, one of Rodriguez’s Redcoats teammates, said at the Vigil Wednesday evening. “Brianna and I made so many plans over the next year, including her visiting me and going to parties once I’m in college. Now I have to go to graduate and go to college for Bri. I know she’s up there smiling down on me and all of us. I can’t think of a time she didn’t have a big smile on her face. She’ll be dearly missed and I will never forget her.”

Xavier Neal, a Heights senior and football player who attended Astroworld with Brianna, praised her kindness, along with his own regret about the way the festival unfolded. “It’s a nice celebration that came too early,” Neal said on Wednesday. “I met Bri this year, and she’s touched my heart like nobody else could. I never got to tell Brianna how much she did for me. She was a good person to be around. Being the last person she was with, it hurts. I want everyone here to know I’m sorry for everything that happened,” he said, his voice breaking.

“It’s not your fault, son,” an adult in the audience said.

The Redcoats gave Rodriguez’s parents Osvaldo and Ester a few commemorative items toward the end of the ceremony, including their daughter’s dance uniform in a large frame, and a pink and white set of balloons tied together like a butterfly.

Her family let the balloon set loose, only for it to get stuck to a nearby tree. “She isn’t ready to leave yet,” one student on the lawn told a friend, tears in her eyes. But a few moments later, the butterfly took off from the branch, joining the hundreds of other balloons bound for the Houston sky.

“You Will Dance With Her in the Sky”

Brianna’s friends and family continued to honor her at a service Friday evening at La Paz Funeral Home. Brianna’s casket was surrounded by pink, white, and red flowers, and pink and rose gold balloons lined the back wall, which was painted like a path to heaven.

Brianna’s younger sister Giselle enlisted a friend to read a speech she wrote for the service, standing quietly as the friend read about late nights the two sisters shared, talking until their parents demanded they go to sleep. And then there were light-hearted stories: Brianna eating chips between sit-ups during a workout, or getting called into Brianna’s room to hear about which boys tried to flirt with her that day.

“I would always come to her when I had a bad day, and she’d be there to give me advice,” read Giselle’s friend. “This isn’t a goodbye, but a see you later. I love you, my sister, rest easy my beautiful angel.”

The service’s pastor, recalling Rodriguez’s love of dancing, called back to a dance her father shared with his daughter for her quinceañera over a year ago. “I promise you this isn’t your last dance with her,” the pastor said. “You will dance with her in the sky, in the clouds of heaven.” 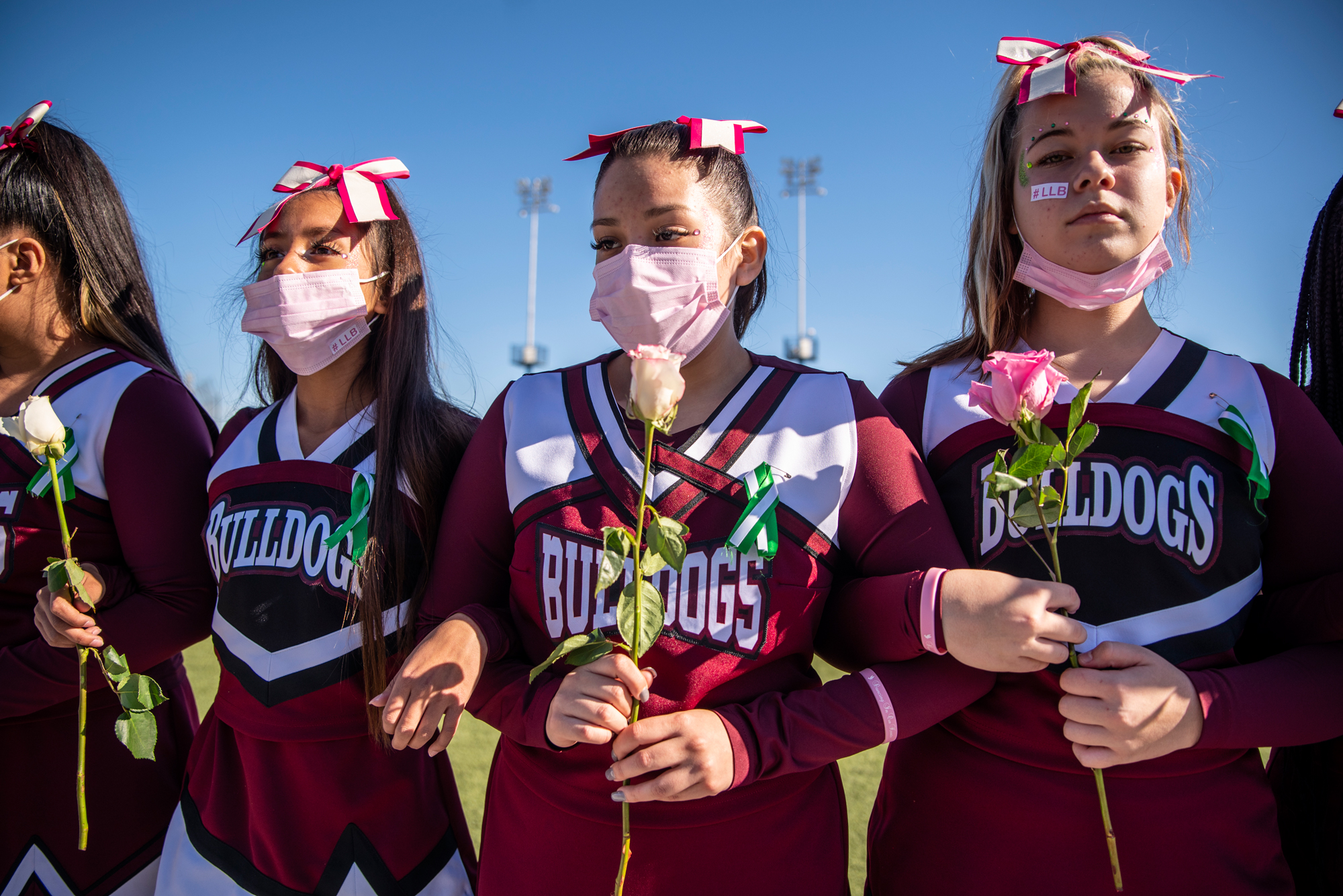 Rodriguez was laid to rest on Saturday, right before that memorial game. Her friend, Xavier Neal, came straight there from the funeral, his long-bomb touchdown grab in the first quarter giving Heights the team’s only points in a 21 to six loss to Memorial.

Memorial’s student section cheered as the timer ran out; a few parents on Heights’ bleachers bemoaned the loss as they made their way toward the exits. But soon after, the two teams met in the middle of the field, kneeling side by side, heads tucked down as they once again took in the bigger losses they had to endure, together this time in prayer. Neal’s mother and father embraced their son by the sideline as he came back from prayer circle, ending the last game of his high school career as a tribute to a fallen friend.

“I was locked in on the field, it was a regular game for me,” Neal told IndieLand afterward, holding a pair of bright pink gloves he wore during the game. “Just knowing she wasn’t here when I came back to the sideline, that’s when I was thrown off my game. That’s where it hit me that it was different.”

These Days, Even Drake Sounds Like Drake Featuring Drake