Billy Jones has been stuck in Los Angeles for three months. In February, the New York booker and promoter went west to break ground on a second outpost for Baby’s All Right, his beloved Brooklyn indie venue that has hosted acts like Beach House, Ariel Pink, and Girlpool. Jones was in L.A. on March 12th when he learned that New York restaurants, bars, and venues were shutting down due to the spread of COVID-19.

“I was actually in the air the night [before], when Tom Hanks’ [coronavirus diagnosis] and the European travel ban occurred,” Jones tells IndieLand. “There was a lot of speculation as to how seriously it was and how seriously to take it, and we just didn’t want to mess around or take any risks that were unneeded.” Baby’s All Right canceled its shows that weekend and shuttered its doors indefinitely; Jones remains in L.A., quarantined for the foreseeable future.

Dozens of independent New York venues faced the same fate as Baby’s All Right; some closed shop right away, while others reduced their capacity to 50 percent that first weekend before shutting down altogether on March 16th, when Mayor Bill de Blasio ordered that all restaurants, bars, and nightlife venues in the city be temporarily closed. Dhruv Chopra, director of operations at the nightclub and concert space Elsewhere, described the initial shutdown as a “nightmarish week,” with more than 100 part-time employees left out of work and more than 600 subsequent events postponed or canceled for this year. Julie Kim, co-owner of the performance space Littlefield in Brooklyn, says she spent the first few weeks of the pandemic frantically applying for loans and grants while trying to provide financial resources for her recently let-go staff.

“The system in New York crashed – most of them weren’t able to file for unemployment,” she remembers. When she spoke to IndieLand last month, only half of her staff had managed to file their claims.

The pause on live music has devastated regional music scenes across the country, and New York, one of the country’s earliest coronavirus epicenters, was hit particularly hard. Along with the despairing financial threat faced by countless musicians and service workers in the city’s thriving local scene, the very spaces that they have based their livelihoods around are in danger; whereas some major bookers like Live Nation have continued to receive investment funding while shuttered, indies haven’t been as fortunate. Conditions have gotten so dire that artists as high-profile as Lady Gaga, Coldplay, and Billie Eilish have called for Congress to provide much-needed support. (Last week, two New York City councilmen formed the “CBGB’s Caucus” to support the city’s independent music venues.)

Venues that were forced to lay off large chunks of their workforce at the beginning of the pandemic are now faced with a snowball effect of further problems: Unable to acquire Paycheck Protection Program (PPP) loans due to an inability to retain staff, these businesses now rely on the mercy of their landlords and may face impending eviction. Until this past month, PPP borrowers were required to spend at least 75 percent of the funds on payroll costs and 25 percent on other expenses, including rent and utilities. The vast majority of small venues can’t afford to rehire staff while business is shuttered, and even if they could, the high cost of rent in cities like New York would quickly drain one-quarter of a PPP loan.

“[The loans] are great for industries that are operating,” says Dayna Frank, board president of the National Independent Venue Association (NIVA). But with many venues non-operational until a vaccine is created or reopening at some level is legally permissible, the PPP funds are still insufficient. “It seems like it should get better, but when you have these huge rents in populated cities, in popular neighborhoods, and tens of thousands of square feet, our overhead is so high that we still can’t get anywhere close to a 40 percent number.”

A coalition of venue owners, bookers, and promoters formed NIVA in April as a means of lobbying government officials to create more protective legislation for independently owned and operated performance spaces during COVID-19. Now consisting of more than 1,300 venues, NIVA’s demands include PPP reform, business recovery grant funds for shuttered venues, and unemployment insurance for contract workers and artists.

But their primary concern is rent. As outlined in the group’s letter to congressional leaders this spring, rent relief may come in the form of mortgage forbearance for landlords or alleviation of property taxes. Either way, the complete lack of rent relief from federal and state governments keeps venue owners up at night, and what may ultimately lead to many spaces’ demise. 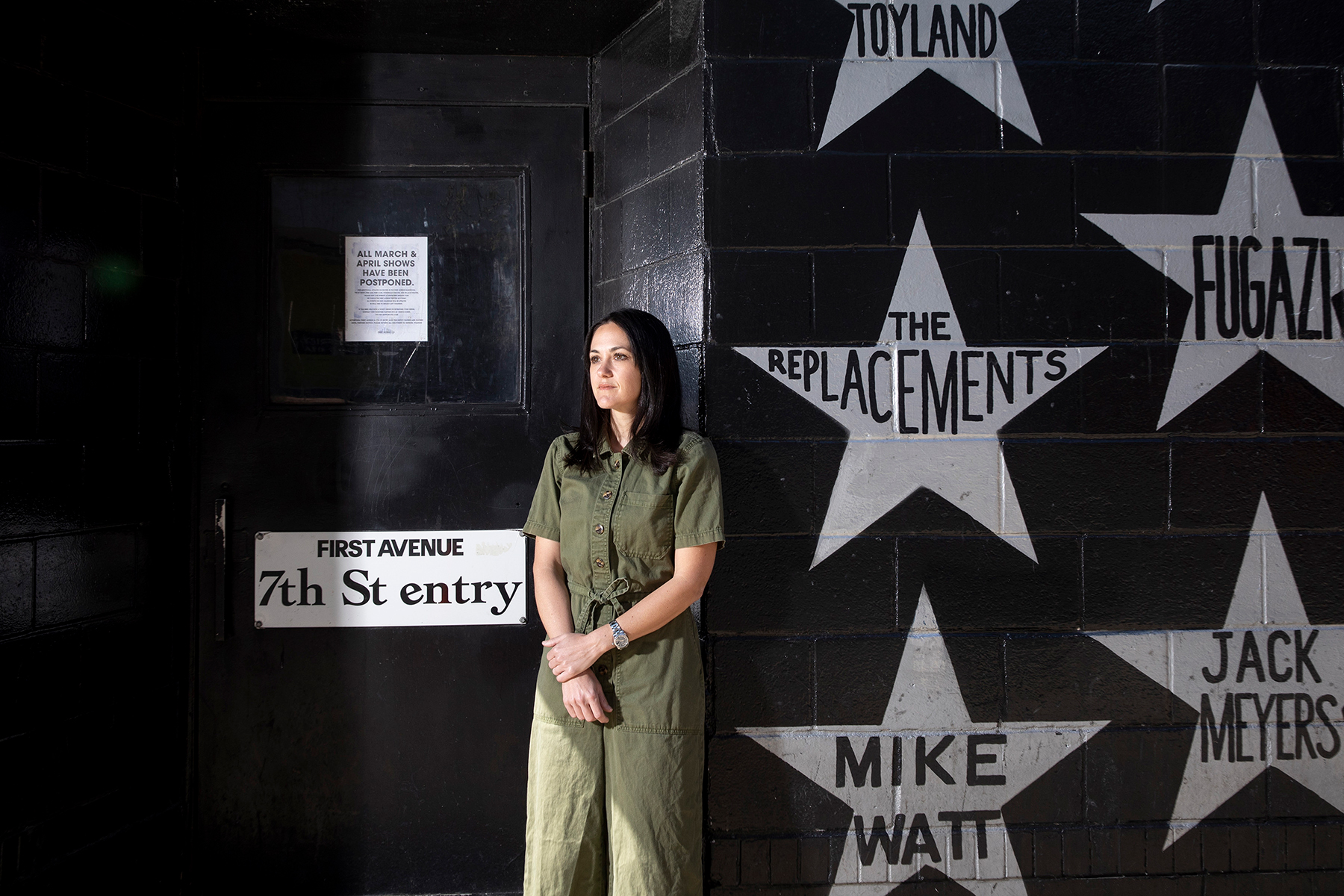 Dayna Frank, the owner of First Avenue in Minneapolis, in May.

With cities like New York still in partial lockdown, and with the U.S. economy in shambles, many landlords are reluctant to force tenants out and create vacancies right now, which has been a lifeline for struggling venues. Evictions in New York City are still suspended. But Justin Kantor, co-founder and director of operations at Greenwich Village venue (Le) Poisson Rouge and vice president of NIVA, knows that venues cannot rely on landlord generosity nor the moratorium for much longer. His concern lies in New York’s ongoing “reopening” plan for the pandemic; once the plan reaches Phase Three — estimated sometime in mid-July — and landlords can evict business tenants, it’ll be game over for many venues.

“You’ll see, in the public, a lot more closings that are happening,” Kantor says. “Right now, there’s three or four venues a week that I’m hearing about, in the nation, that are announcing it publicly. But a lot of [others] are probably in just as bad shape — they just haven’t officially gotten the boot by their landlord.”

No venue has been spared from this crisis, regardless of how beloved it may be by fans and musicians. Even top-tier spots like Manhattan’s Bowery Ballroom and Mercury Lounge have set up GoFundMe pages for their laid-off staff or to keep the lights on. In May, NIVA conducted a survey of their member venues and found that 90 percent of respondents did not have the financial means to survive longer than six months without federal aid.

As is the case with bars and restaurants, some venues have scraped by with limited services or extended crowdfunding efforts. Williamsburg’s Union Pool and Our Wicked Lady have opened their doors for takeout drinks, and Elsewhere just recently announced it will be reopening its rooftop space for limited food and bar service. Out of the dozen or so Brooklyn venues that spoke to IndieLand, nearly all of them had established a livestream or video performance series on their website or Instagram. And there are the rare success stories: Saint Vitus, a Greenpoint metal bar that counts Blink-182 and Nirvana members as fans, raised more than $130,000 in relief through an ambitious Kickstarter campaign.

But these are all far from permanent solutions to COVID-related financial woes. “It’s a bit of a ‘Let them eat cake’ argument to say, ‘Well, you can do livestream, you can do alcohol delivery,’” says Chopra of Elsewhere. “Or, ‘The PPP is great because it’s so popular.’ It’s almost like saying the bread lines in Soviet Russia were great because they were so popular.”

Even as NYC has entered Phase Two of reopening, the ambiguity surrounding how live spaces can proceed has only worsened the situation. Take the confusion that restaurant and bar owners have expressed toward New York’s reopening guidelines, and add in the further complication of packing hundreds of people into an enclosed space to watch hours-long performances … all without spreading coronavirus. When Phase Four arrives in New York and venues can legally open their doors again to the public for mass gatherings, it won’t necessarily be simultaneous with a vaccine, and local venues in particular feel a responsibility toward the health and safety of their communities.

The obvious solution, at least in the minds of Mayor de Blasio and Gov. Andrew Cuomo, is to reduce venue capacity by 50 percent. But multiple venue owners who spoke with IndieLand expressed frustration with this proposed guideline, stating that the vast majority of independent venues are unlikely to turn a profit unless they are “firing on all cylinders” at full capacity every night, as Kantor puts it. “If their late nights aren’t going well, their concerts aren’t going well, their bar sales if they have a front bar that’s open to the public, they’re not going to be able to make enough money to make to pay their staff and to pay their rent,” Kantor says. “I don’t see how it would work [without that].”

There are also other detailed safety questions that need addressing. Venues may require all of their attendees to wear masks, but what will happen to serving drinks at the bar? Will bands be required to wear masks onstage? How many hand-sanitizing stations should there be, and where? What about temperature checks?

Some performance spaces are grappling with more unusual factors. The Muse is a black box theater and music venue in Brooklyn that doubles as a circus and aerial school, with acrobatic performers appearing onstage with musical acts. When the space finally reopens, it will have to contend with the safety of its performers as well as its audiences. “Some cleaning products can’t be used on our safety gear,” says founder and director Angela Butch, citing deterioation issues. “And [there’s] also the unique scenario of masks — it does limit your breathing, and if I have an aerialist that’s up 30 feet in the air and their breathing is slightly compromised or they’re exerting themselves, there’s a chance that they would pass out, and I can’t have someone pass out 30 feet in the air. There’s also the hazard of strangulation with masks in circus work.”

Even after venues reopen, there’s the question of when it will become feasible for touring artists to perform outside of their home base. Ric Leichtung, co-founder of concert promoter AdHoc, says the events most likely to draw larger audiences in any city will always be artists from out of town. With acts far less likely to travel until there’s a vaccine, venues will have to rely on local acts to fill their lineups — a great exposure opportunity for musicians in the area, but one that’s less likely to draw as much revenue as a smattering of touring acts on the bill. “It has a trickle-down effect on all the people that are behind that event,” says Leichtung. “The promoters, the venues that are selling more drinks, everyone.”

The long-term and possibly permanent closure of so many venues is guaranteed to have a ripple effect across the whole industry. As smaller venues run dry and shutter, that will leave fewer spaces for independent artists to cultivate their craft, develop a following or catch the attention of label talent scouts. As Christine Karayan, owner of famed L.A. venue Troubadour, wrote, “These venues are like families to the people who work there and play there, and the patrons that come there become like family. They come all the time. You see the happiness when their favorite band plays. You see that ‘aha moment’… You cannot stream that, you cannot go to the Staples Center for that.”

Back on the West Coast, Billy Jones is hoping to move forward soon with the Baby’s L.A. project. It’s five times the size of the original 280-capacity venue in Brooklyn, which will present its own operational challenges when it finally opens its doors. His optimistic side believes that New York’s culture scene will bounce back, just as it did in the years following 9/11 and Hurricane Sandy.

“Everyone throws around the word ‘resilient’ right now,” Jones says. “But there’s got to be a way to do it.”

Todd Rundgren Says He Was Frustrated Collabing With ‘Dilettante’ Kanye

Gerry Marsden, Gerry and the Pacemakers Singer, Dead at 78