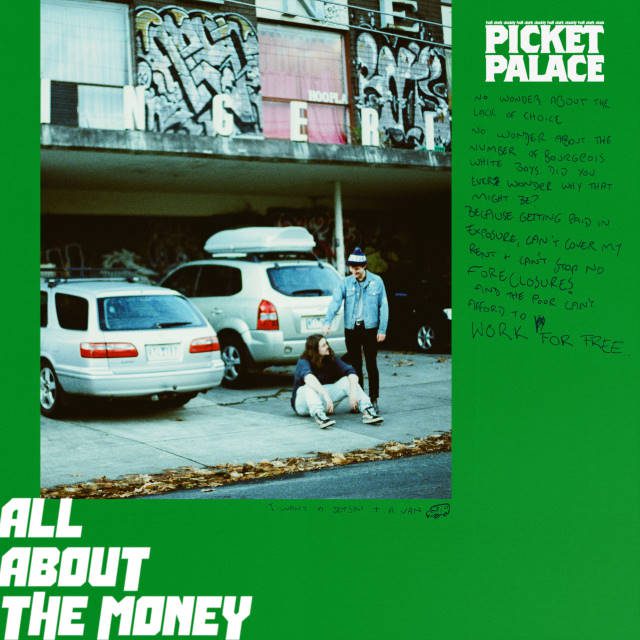 Melbourne punk band Picket Palace take their name from the apartment block where they were conceived back in 2015. Their biggest track to date was 2019’s ‘The Footy Record’, when their tribute to Aussie Rules player Anthony McDonald-Tipungwuti went viral across the nation.

‘All About The Money’ is a tongue-in-cheek assessment of the backlash they received from some fans by ‘selling-out’ – something which the band aren’t too worried about. “I reckon it’s fucking funny as that people were calling us “sell outs” on social media… like, dude I’d love to sell out, rent’s fucked where I live, I’ll write you whatever song you want for a new oven,” jokes frontman Seamus.

“We thought it was hilarious to imagine a version of ourselves who had been so excited about getting our stupid faces on the stupid telly that we would suddenly throw away all our integrity and sell off our creative freedom to become celebrities and make ridiculous demands about jetskis. That was what made us laugh the most when we were throwing ideas around, the idea of a band who are desperate to sell out but no one’s buying,” explains Jack from the group.

This is a really fun song and ready made for a sing-along at a party after a few drinks; it gives me good vibes and it’s a track that I would listen to time and again.

All fun aside, however, there is a more poignant message which comes through – only the privileged can pursue a career in the arts, because “the poor can’t afford to work for free.” Cheerful and entertaining in nature but also socially-conscious, ‘All About The Money’ is a track which definitely deserves a listen.