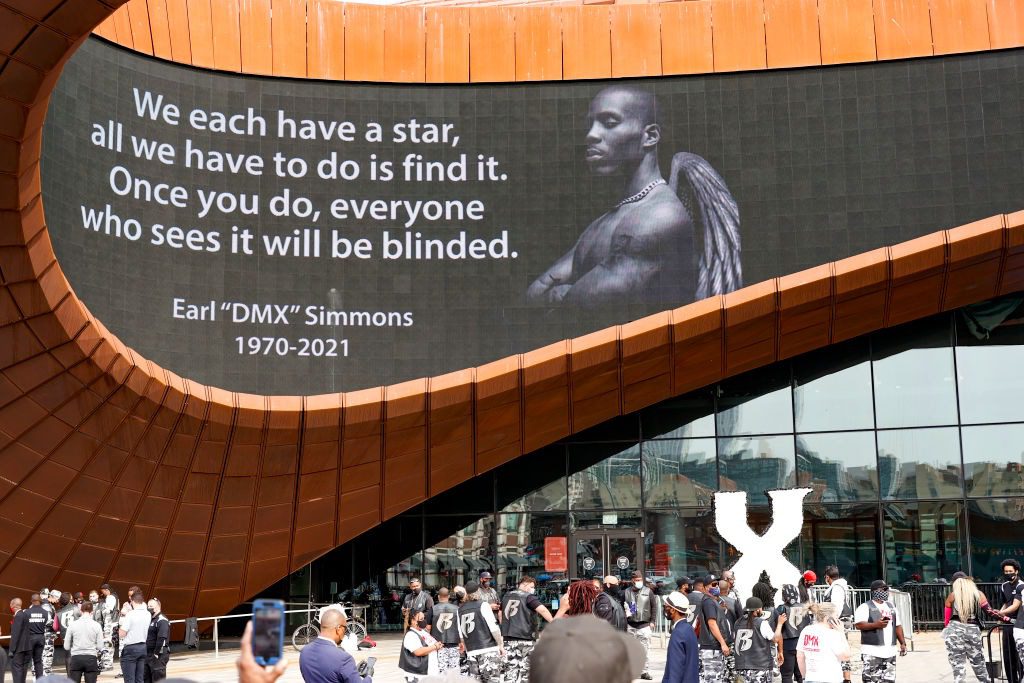 On Saturday, April 24th, DMX took his last ride through the streets of New York. Flanked by thousands of motorcycles, his blood red casket sat atop a monster truck with the words “Long Live DMX” emblazoned on the side as it made its way from his hometown of Yonkers to the Barclays Center in Brooklyn, where friends and family were gathering to celebrate the life of the late rapper who died April 9th at the age of 50. It was a legendary sendoff for an artist who poured his soul — with all its conflicts, its traumatic pain and its fierce love — into his music, forever bonding himself with the millions of people around the world who listened.

As the procession arrived at Barclays, the motorcyclists, many wearing leather vests bearing the Ruff Ryders logo, popped wheelies and burned their tires into the street, sending a thick fog of smoke into the air above the intersection on Flatbush and Atlantic. As fans danced and sang along to enduring DMX hits like “Ruff Ryders’ Anthem” and “Party Up (Up In Here),” enterprising sellers hawked commemorative T-shirts, and members of the Nation of Islam passed out newspapers with a portrait of the rapper’s face on the cover. On the big screen outside of Barclays, a picture of DMX with angel wings appeared next to a line from his 1999 song “Fame”: “We each have a star, all we have to do is find it/ Once you do, everyone who sees it will be blinded.” 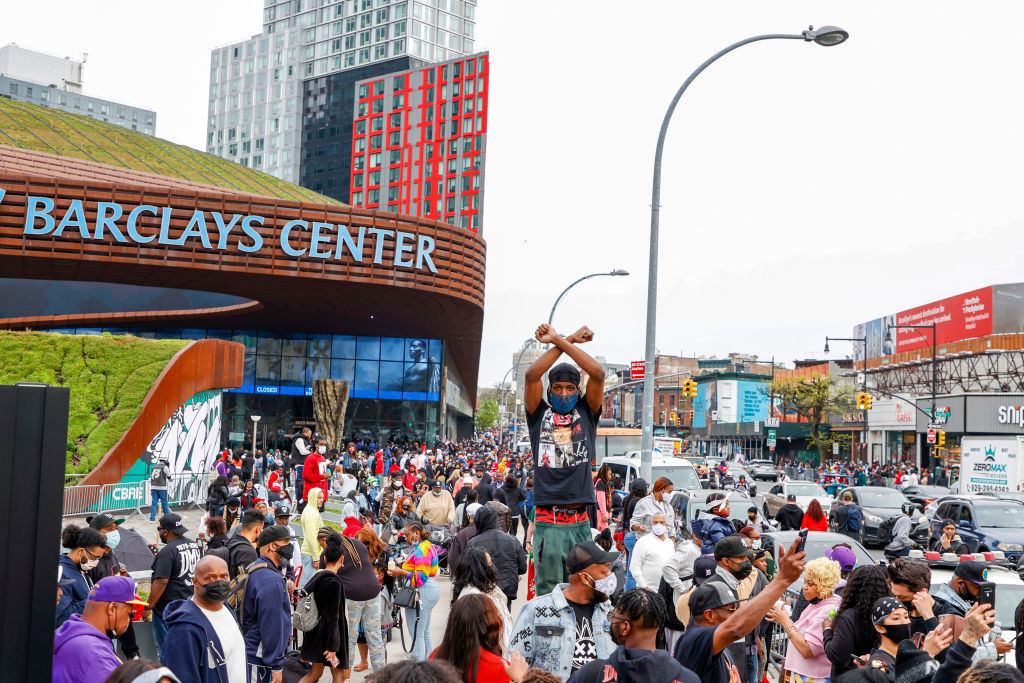 For all the rowdy exuberance of the scene outside, the memorial service struck a more introspective tone, a fitting change of pace for a rapper who could switch from macho aggression to sincere spirituality in a matter of bars. The service opened with a video of DMX riding an amusement park ride with one of his daughters and, as the ride takes off, comforting her with a hoarse yell: “Daddy’s here.”

His 15 children featured prominently in the memorial, honoring the man the world knew as DMX, but they knew as “Dad.” Taking the stage alongside all of his siblings, Xavier Simmons, DMX’s eldest child, remembered a father who followed up his admonishments with loving hugs. His daughter rapped a moving tribute, her chorus following along with the cadence of “Slippin’,” DMX’s somber yet uplifting 1998 anthem. “I’m growing, I’m learning to hold my head up/ My daddy still holding my hand so I got to stand up,” she rapped.

The healing gospel of Christianity that DMX weaved into his recorded music and his live performances shaped much of the 90-minute ceremony. In between testimony from family and friends, Kanye West’s Sunday Service Choir performed renditions of Soul II Soul’s “Back To Life,” Whitney Houston’s “Jesus Loves Me,” and the Clark Sisters’ “You Brought The Sunshine.” On stage, clad in hooded robes, the choir moved in unison and sang in rounds behind DMX’s casket, which remained at the front of the stage for the duration of the service.

The stage itself, a pyramid-like structure with an inverted pyramid floating above it, resembled the abstract set-ups that West has used in his own concerts. At one point, footage of DMX delivering a prayer at Kanye West’s 2019 Coachella performance was projected onto the stage. At another break in the speeches and songs, slow-motion video of DMX moved across the stage as his “Prayer,” from It’s Dark and Hell Is Hot, played on the speakers, his gravelly voice rising, falling, and echoing around the sparsely populated arena.

Some of DMX’s peers remembered their friend, before he would take the industry by storm with back-to-back No. 1 albums in 1998, as a rapper with the world at his fingertips. Wearing camouflage army fatigues and Timberland boots, Nas recounted a moment with DMX outside Manhattan’s storied hip-hop venue, the Tunnel, while the two were filming Hype Williams’ Belly. “He looked at me, tears in eyes,” Nas said, “because he knew about the journey he was about to embark on.”

Styles P — who took the stage along with the rest of Ruff Ryders, the collective and label that helped guide DMX to superstardom in the late-Nineties and early-2000s — told a story about serving time in jail with his fellow Yonkers native before the fame. “He came to me and said, “You ready, dog? Your rhymes ready?” he remembered. “Then we went to a part of the jail I never seen before. X had a band set up, drummers, everything. 20 MCs, he ate ‘em all. That was DMX, the legend.”

The Lox rapper also remarked on all that DMX endured to bring his music to the world. “He was in pain the whole way, whenever you seen him, he was in pain,” he said. “But he was built out of love, and he just spread it.”

Members of the Ruff Ryders crew were visibly choked up as they spoke about the profound impact that DMX made and the legacy he leaves behind. Eve paused during her speech, after sharing her gratitude for having the opportunity to know DMX as “a man, a father, a friend.”

With emotional support from Ruff Ryders co-founders Darrin “Dee” Dean and Joaquin “Waah” Dean, Drag-On took the mic to remember DMX finding him in his Bronx neighborhood, vouching for him to the Dean brothers, and birthing his rap career. “I don’t exist without this man,” he said, tears streaming down his face as he pointed at the casket behind him. “The air I breathe is what he put in my lungs.” 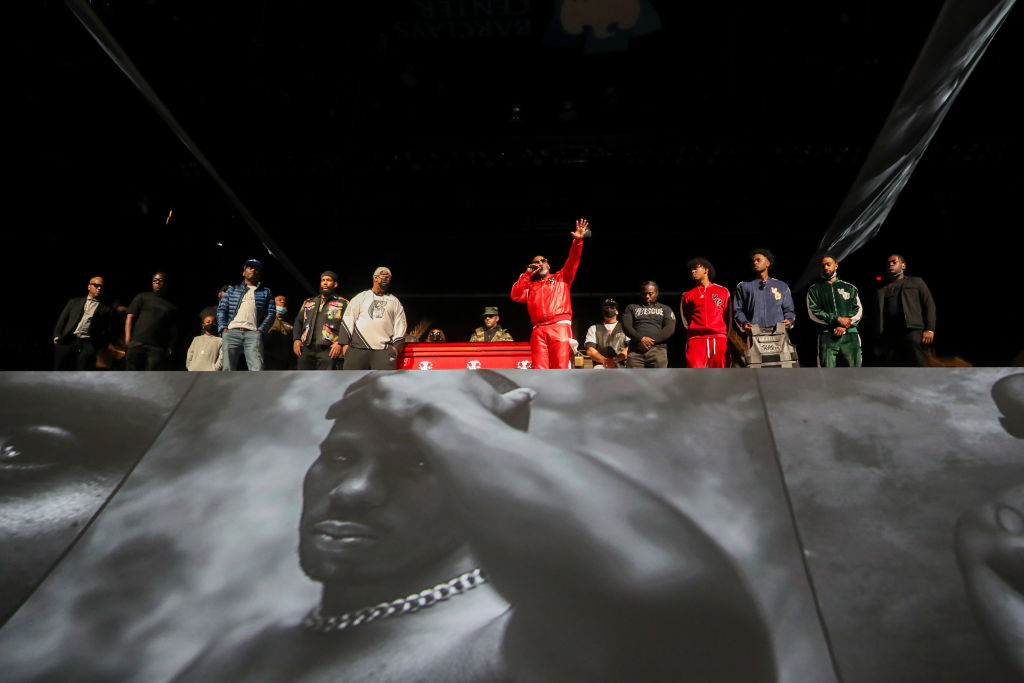 Swizz Beatz, who produced many of DMX’s biggest hits and had been working on a new album with the rapper when he died, was the last to speak. He offered a sobering reminder to those in the crowd and hinted at complications with the late rapper’s estate. “I just wish all these people showed up for him when he was here,” Swizz said. “The things I’m witnessing from my brother’s passing, it’s a big educational thing for me to learn. A lot of people ain’t your friend, a lot of people ain’t your family. And I need everybody to do a will. You do not want strangers, bloodsuckers, handling your business when you’re not here. You want the ones that you love handling your business. But I’m going to make sure my brother’s straight.”

As the service came to a close and the lights came on, a multi-generational New York rap moment took place in the Barclays Center hallway, one that seemed indicative of the emotional potency of the day. While attendees streamed out of the arena, Busta Rhymes greeted Bobby Shmurda, the Brooklyn rapper who returned home in February after spending six years in prison. Surrounded by a circle of people recording the exchange, Busta Rhymes encouraged the younger rapper to enjoy his freedom and take his time getting reacclimated.

“You know the most beautiful thing, though?” Busta Rhymes told him. “You stood for something.”

“You know why?” Bobby asked back, pulling his elder in for a tight embrace. “Because I was raised by motherfuckers like you.” Then, pointing back inside to where DMX’s casket still lay. “And that man in there.”