As summer turned to fall in 2020, Interpol’s Paul Banks was laying low in Edinburgh, sitting by a window in “a comfy chair,” watching the leaves change outside. He sang quietly, trying not to disturb the neighbors as he worked on new songs he describes as “very relaxed,” “intimate,” “positive-feeling,” and “a bit more uplifting.”

These aren’t words that your average person with vivid memories of the early 2000s would expect to hear from anyone in Interpol. Back then they were Manhattan’s kings of moody style, the guys whose immaculate air of frowny-faced glamour was as memorable as the riffs on songs like “Obstacle 1” and “Evil.” But it’s been a long time since their debut LP — Turn On the Bright Lights turns 20 next summer — and bands grow.

“I’m sure you could look at a psychoanalysis, in the context of a pandemic, why an artist who typically writes morose shit might go in a different direction,” Banks reflects. “It might just be where I’m at.”

The result of that creative rebuild is a new Interpol album, still untitled, coming out in 2022 on Matador Records. Banks sounds excited as he logs onto Zoom from the “very vibey, very English” studio in North London where the band is finishing up recording with producers Alan Moulder and Flood. “It definitely feels like us,” he adds. “It’s the heart and soul of our band — like, there’s a DNA to our sound. Another part of me thinks, ‘This might be super fucking different.’”

The tour for Interpol’s previous album, 2018’s Marauder, ended on a high note on Nov. 23, 2019, when they played for a sold-out stadium of 40,000 fans at the Vivo X El Rock festival in Lima, Peru. The plan after that show was always to take a break and recharge, so Interpol’s three core members went their separate ways, with Banks heading for Panama to spend some time surfing and hanging out by the ocean.

Four months later, on March 12, 2020, he was on a plane en route to visit his girlfriend in Scotland when a flight attendant came through the cabin to announce that Donald Trump was imposing a 30-day travel ban on most of Europe. Luckily, Banks was born in England and has a U.K. passport, which allowed him to ride out the chaotic weeks and months that followed. “I wound up staying in Edinburgh for the first year of the pandemic,” he says. “Full-on Gilligan’s Island scenario. In a romantic sense, it was lovely. I was fortunate.”

With guitarist Daniel Kessler and drummer Sam Fogarino hunkered down in Spain and Athens, Georgia, respectively, the band — by now a decade into the second act that began with founding bassist Carlos Dengler’s departure in 2010 — began to think about what was next. Soon they were dipping a reluctant toe into email collaboration. “It was a bit of a challenge, because we’re still an old-school band, where we get into a rehearsal space and hash out the songs, and the songs have to prove themselves there,” Kessler says. The lockdown forced him to find a new routine of working out song sketches on his own and sending files to his bandmates. “Strangely enough, I got pretty into it,” Kessler adds. “There was nothing else to do. It helped keep your brain on the right side of things, despite everything else happening around you.”

Banks, inspired by the ideas Kessler was sending, nestled into that comfy chair and ordered himself a new Fender P-Bass on Amazon. “I got a cream one, which is something that was new for me,” jokes Banks, who’s better known for using instruments as somberly toned as his wardrobe. “Like, ‘I dunno, should I do it?’ ”

He recalls listening to Kessler’s chord progressions and trying to write melodic vocal lines in real time. “It’s like a surrealist experiment,” Banks says. “You’re free-writing, but you’re also reacting to an architecture that Daniel has probably really pored over. As a singer, it becomes a real wilderness, with a boundless potential.”

By this past summer, conditions in the world had improved enough for Banks, Kessler, and Fogarino to gather in person for rehearsal and songwriting sessions at a couple of houses in the Catskills. “It was fun, man,” Banks says. “It was cozy, too. … Sam was on a real cooking bender. He’s a gifted chef who is really passionate in the kitchen, and he has the touch. It was fun watching him prepare these seriously outlandish and elaborate meals all day.” 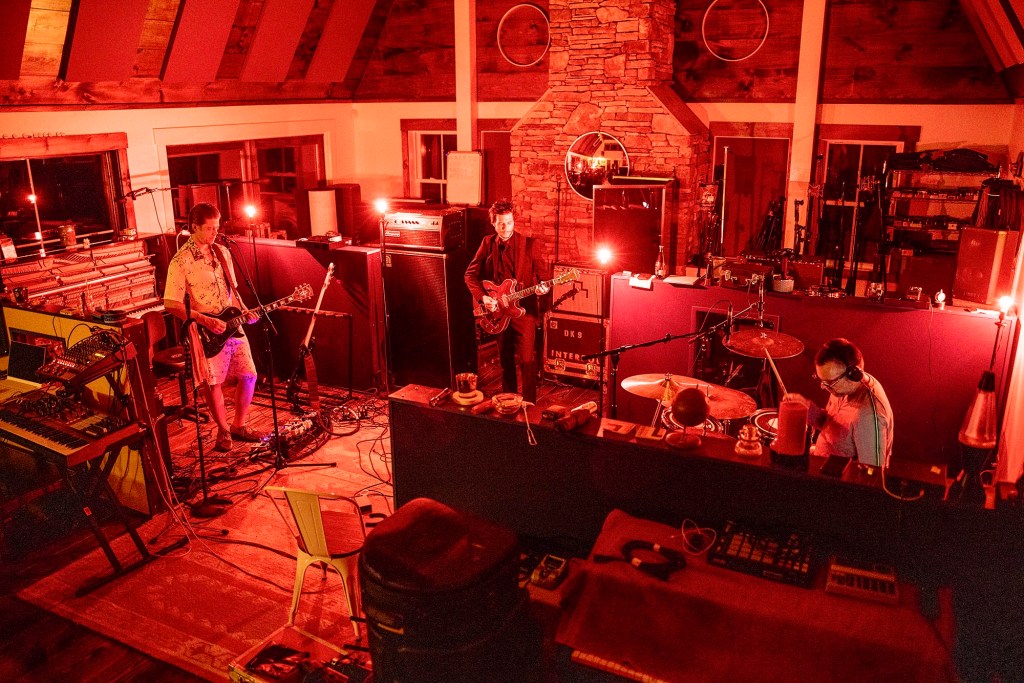 Banks drew on unexpected influences, like Pet Sounds and the Red Hot Chili Peppers. (John Frusciante is “a fucking full-on genius,” he says, hailing the guitarist’s work on 1991’s Blood Sugar Sex Magik and his 1994 solo LP Niandra LaDes and Usually Just a T-Shirt.) On Interpol’s recent releases, Banks adds, “I’ve been fixated with deconstructed guitar riffs. Like, shit that I could teach my nieces in two minutes, and they don’t even play guitar. I feel like I’ve got a couple doozies on this record.”

This fall, the group reconvened in London to work with Moulder (who previously mixed 2010’s Interpol and 2014’s El Pintor) and Flood. Together or singly, the producers have worked on a sizable chunk of the greatest darkly romantic rock records of the past 40 years, from Depeche Mode to PJ Harvey to Smashing Pumpkins to U2 — a catalog that includes several Interpol favorites. “Hearing Nick Cave stories is pretty cool,” Banks says. “Flood made a point of experiencing the music we sent him by itself, rather than going back and studying our catalog. This round of songs exists as a brand-new thing devoid of any baggage.”

When he spoke with IndieLand, Banks was putting the finishing touches on the album’s lyrics, always a tricky step. (“You come down to the time when the record is about to be made and you don’t have the lyrics, and it’s like, ‘Fuck.’ ”) But he was feeling energized by the band’s new direction. “A few of the songs in particular have really unabashedly positive sentiments,” he says. “Something that feels good is the aspiration.”

Two decades past Turn On the Bright Lights, both he and Kessler are grateful that Interpol is still going. “Everything we’re doing as a trio, it feels deeply necessary,” Kessler says. “We’re not doing this because it’s time to do this — we’re doing this because we need to do this. That’s been there since Day One. You can’t take it for granted that you still feel that way, 20 years later, but I do.”

Kessler gets wistful thinking back to the days when he and his bandmates were recording the debut album that would soon be the talk of New York. “I remember it took so long for us to get signed,” he says. “No one was showing interest in us for the first four years. All I ever wanted, my dream, was just to make a record. I never got further than that, because I wasn’t so audacious. It wasn’t a given. I couldn’t believe we were finally doing it. Everything else after that was just a gift.”

Once this album is done, they’re looking forward to scheduling Interpol’s first live shows since that night in Lima two years ago. “I feel like there’s going to be a rare moment between the audience and the performer, where each one of you and us onstage are all coming at it from the same place,” Kessler says. “There’s going to be a deep mutual appreciation. I just can’t wait.”

Alessia Cara on Amy Winehouse’s ‘Back to Black’: ‘She Just Laid It All Out’