At 8 a.m. Wednesday, the line already snaked around the block in front of the U.S. District Court in Brooklyn as the racketeering trial against R. Kelly kicked off, with both sides presenting opening statements in a trial that could land the singer in jail for years.

Fans huddled close to the doors, periodically shouting, “Free R. Kelly!” as cameras swarmed court attendees, such as the parents of Kelly accuser Jocelyn Savage and celebrity attorney Gloria Allred (sporting a “Notorious RBG” face mask). At one point, a burly man in a black suit escorted in a grey suit, white shirt, and tie — Kelly’s attire for court.

Kelly was arrested in Chicago in June 2019 and was indicted for child pornography, enticement of a minor, and obstruction of justice. Brooklyn prosecutors also charged Kelly with racketeering the same day, designating him as an “enterprise” that helped him “prey upon young women and teenagers whose dreams of meeting a superstar soon turned into a nightmare of rape, child pornography, and forced labor.” He is also facing sex-related charges in Minnesota. Kelly has pleaded not guilty to all charges.

The racketeering charge is unique, as it was first created to prosecute leaders of organized crime operations. Recently, however, the charge was used in the NXIVM sex cult case to prosecute members of the group, led by Keith Raniere, a possible model for Kelly’s case.

The initial indictment accused Kelly of coercing, exploiting, or kidnapping a handful of women. Over the course of the trial, the prosecution plans to present new evidence from almost 20 individuals, several of whom were underage at the time of the singer’s alleged misconduct. A July filing accuses Kelly of committing sexual abuse, unlawfully imprisoning women, knowingly passing a woman a sexually transmitted infection, and using a member of his enterprise to bribe a state employee. Prosecutors also plan to introduce testimony from a 17-year-old boy who claims he met Kelly at a McDonald’s in 2006 and later propositioned him before a sexual encounter.

Assistant U.S. Attorney Maria Cruz Melendez took the stand first, intoning that “this case is about a predator [Kelly],” who, for three decades, used his fame and popularity to target young women using “lies, manipulation, threats, [and] physical abuse.” He used his “money, clout, and public persona to hide his crimes in plain sight,” Melendez said. She leaned in to the racketeering charge, stressing that Kelly used his “inner circle” to “criminal ends.”

“This is not a celebrity who likes to party a lot,” she added, going on to allege that Kelly used his persona and access to have “his pick” of sexual conquests. He “collected girls and women as if they were things,” Melendez said, and he was “able to do these things unchecked.” Kelly used “every trick in the predator handbook,” she said, including targeting minors, grooming them and their families, isolating them from friends and family, and enforcing rules on their behavior. Rules included calling him “Daddy,” not looking at other men, wearing baggy clothing when not in his presence, and asking permission for basic tasks such as using the bathroom.

“That’s the man who sits here before you,” Melendez said, before detailing the alleged experiences of six of the survivors, starting with the singer Aaliyah, who Kelly reportedly met in 1992 when she was 12 and married when she was 15 — after securing a fake ID — when she told him she was pregnant. Next, Melendez spoke about Stephanie, who allegedly met Kelly at age 16 at a Chicago McDonald’s in 1999, leading to a six- to eight-month sexual relationship during which he recorded them having sex and enforced the aforementioned rules.

Next, she detailed a reported interaction Kelly had with a young woman named Sonya in 2003, who was in her early twenties, and pursued an interview with the musician for a radio station. After flying to Chicago to meet with Kelly and signing an NDA, Sonya claimed she was locked in a room in his studio for three days during which she was not fed and escorted at all times to the bathroom. After she was finally given cold Chinese food and soda, she says she fell asleep instantly and awoke with a wetness between her legs and Kelly doing up his pants. Before she was allowed to go home, Melendez said, the woman was required to turn over a list of people she cared about, including her grandmother. She read this as a threat.

Melendez then detailed the accusations of Jerhonda Pace, who was 16 in 2009 when she met Kelly at a party. Kelly, she said, took the girl’s virginity and “wanted to train her; teach her to give oral sex.” They spent six months together, during which Kelly allegedly recorded them having sex and was violent with her; Pace claims she was forced to write and sign a letter saying that she stole from him as collateral.

Zell, who was 17 in 2015, believed Kelly was going to help her with her career, according to Melendez, but instead, the young woman ended up in a five-year relationship with the singer during which she engaged in a sexual relationship with him and with strangers as punishment for breaking his many rules. She was also, Melendez said, given herpes by the singer.

Melendez concluded by discussing Faith, who was 17 when she met Kelly in 2017 backstage at a show. Faith reportedly traveled to see Kelly, had unprotected sex with him, and had her sexual relationship with the singer recorded on an iPad. She sued him for giving her herpes and, according to Faith, he threatened to leak explicit photos and video of her if she didn’t give up the suit. 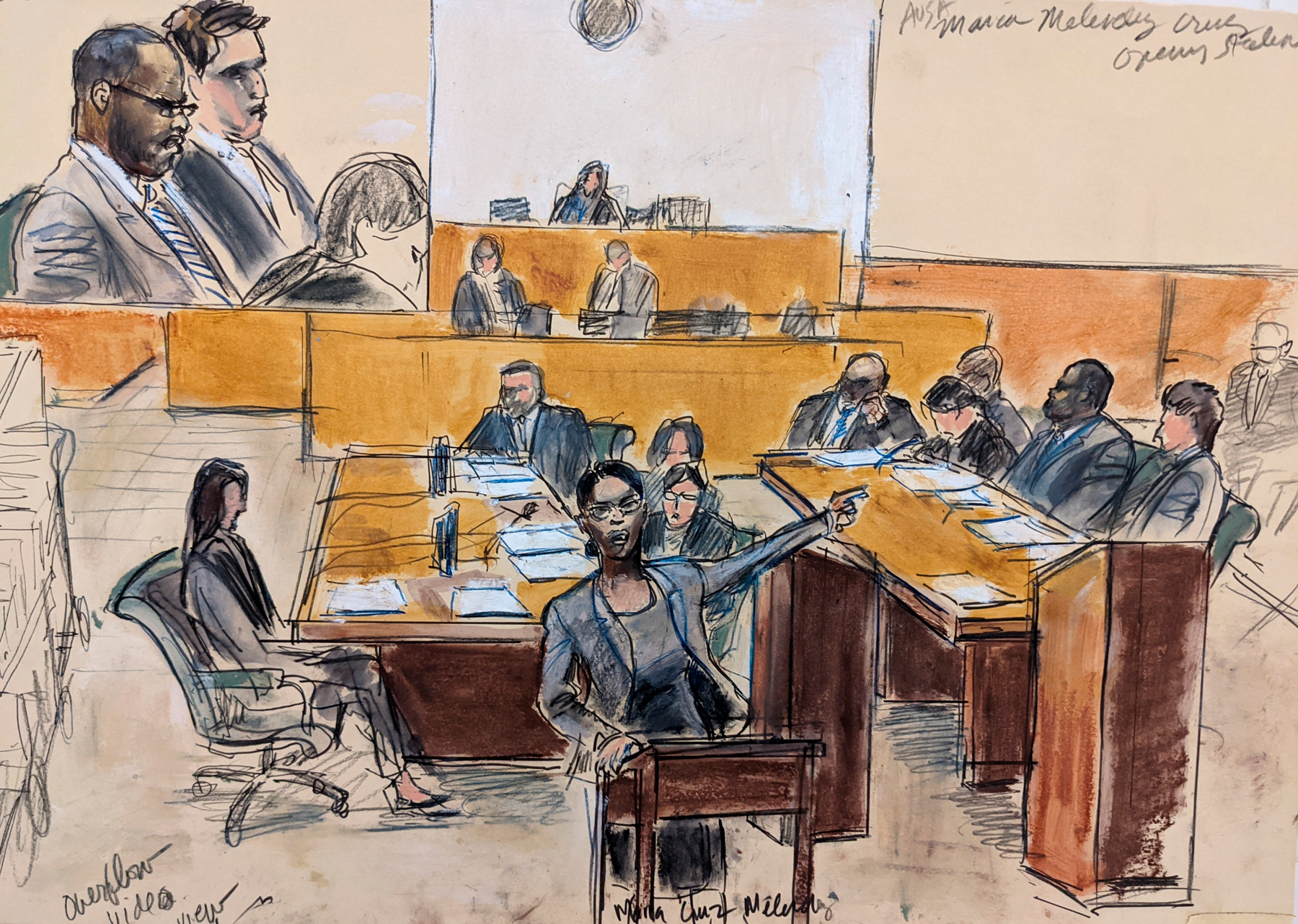 Attorney Nicole Blank Becker then took the stand for the defense, giving a wide-ranging opening statement that drew several objections from the prosecution that were sustained by the judge — and using the phrase “ladies and gentlemen” over 100 times. She began by taking aim at the racketeering charge against Kelly, calling it “uncharted territory” and claiming that the government wants to depict Kelly as the “leader of some large enterprise similar to [mobster] John Gotti.” The government, she said, was trying to paint Kelly as “some singing boss.”

“Evidence is going to show that the government wants you to think that Mr. Kelly singlehandedly directed an elaborate scheme,” Becker said. She suggested that this was impossible given that Kelly played professional basketball from 1997 to 1999 and thus was not operating under the R. Kelly musician persona at the time.

Becker then went on to address the witnesses, saying, “Their testimony will crumble when it comes to cross-examination” and appealing to the jury to use “common sense” when listening to their statements. She stated that many of the witnesses have agendas, pointing out that some have written books, appeared on talk shows, and “enjoyed the notoriety.”

Becker denied that Kelly “recruited” these women — who she more than once accidentally called “girls” — asserting that they were fans. “Some of the relationships with Mr. Kelly were beautiful,” she said, adding that these women knew what they were getting into with the singer and that they were dating a busy man who had many girlfriends, hence all the travel they engaged in with him. “You will not hear they were recruited,” she said. “They’re going to form this picture that Mr. Kelly is this monster,” she said, referring to the prosecution.

As for the rules, Becker stated that the women only complained of such restrictions after their breakups. She said that there were no rules in place in actuality and that each allegation had a reasonable explanation. For example, women often wore baggy clothes not because Kelly required it, but because they felt uncomfortable in the crowds that formed when they went to see “their man and his craft.” Also, she dismissed allegations that Kelly made women use cups and buckets as bathrooms, saying they were often traveling in vans and buses — as Kelly is afraid to fly — and did not have access to restrooms.

“Ignore the window-dressing,” she said. “You’re going to hear so much drama. So much drama it will almost take you off the path. … The drama will dissipate and the truth will be clear.”

She spoke first about Aaliyah —”Aaliyah, God rest her soul, is not going to be here to testify on the stand” — before moving on to Jane Doe Number Two. Becker explained that Doe met Kelly in a coffee shop and that they dated for six to eight months. She mentioned allegations of a sex tape and claims that Doe Number Two had been exploited before concluding, “Evidence will show quite the opposite.”

As for Jane Doe Number Three, Becker said that the woman, who claimed she was held in Kelly’s Chicago studio, had access to the bathroom, the shower, and two phones. “You will be asked to make assumptions,” Becker said, referring to allegations that the woman fell asleep and woke to wetness between her legs. “You won’t be able to find Mr. Kelly guilty of that charge,” she said.

“I can’t count as high how many untruths you’re to hear,” Becker began, claiming Jane Doe Number Four is an “admitted liar” and a “superfan.” “Groupie, we don’t usually like to use [that word], but it is a word, is an understatement,” she said of the woman, who she says attended Kelly’s previous trial every day. She did not specify which trial. “It will be obvious she possessed a special passion for Mr. Kelly,” Becker said, adding that Doe Number Four ended up writing a book about the relationship.

She then skipped ahead to Doe Number Six, who she said met Kelly backstage at a concert. Becker said the two dated and when it ended, “You will add her to the saying, ‘Hell hath no fury like a woman scorned.’” She also questioned Doe’s assertion that Kelly gave her herpes, saying, cryptically, “Wait until you see how confident they are [where they got it].”

Becker finished up with Jane Doe Number Five, who she called a long-term girlfriend who met Kelly after her parents took her to his show. “She was in an envious position,” Becker said, saying that she “unraveled” when she didn’t get everything she wanted from Kelly. “Just another example of someone who ended up having a motive,” she said.

“What we have described thus far is a number of women who are after revenge,” Becker added, before segueing into Kelly’s “choice of partners” and adding that there are rumors jurors might hear in court that “Mr. Kelly is gay,” a reference to the aforementioned young man who says he met Kelly at McDonald’s.

“You will see that that topic, we call that fluff,” she said. “The topic of his sexual preference. It’s window-dressing and we hope you see through that.” Becker then went into a discussion of the word “daddy,” which Kelly allegedly liked to be called, saying that the term is often used to both relationships sexual and nonsexual in a positive manner.

Becker then bafflingly asserted, “You’re going to hear that Mr. Kelly cannot read or write,” before discussing his musical process and saying that he was “always on the move.” The judge then called an aside, after which Becker resumed her statement, saying that the jury was here to prove Kelly’s guilt beyond a reasonable doubt. “The United States of American versus Mr. Robert S. Kelly, that is some big shoes to fill,” she said to the jury. “Ladies and gentlemen, you get to fill those shoes.”

The Avett Brothers Address Divided U.S. in New Video for ‘We Americans’